The Mild Success of Roman Horak

Share All sharing options for: The Mild Success of Roman Horak

Roman Horak's name brings two immediate responses to mind: the first is laughter as I picture the character Roman from Party Down: 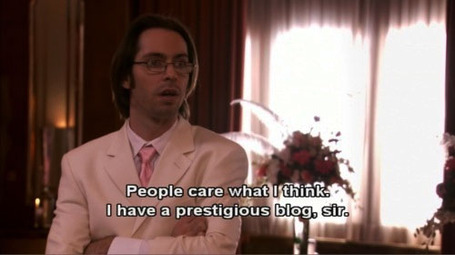 The second is a dark and deep sadness stemming from the moment Tim Erixon, winner of the very prestigious 2011 Kris Chucko award, was traded to the New York Rangers.

When Roman Horak was acquired, it was widely accepted that he was a piece that GM Jay Feaster took in exchange for Tim Erixon simply because that was all that was offered. But given that Horak is about to make the opening night roster for the Calgary Flames while Tim Erixon is on the outside of the NHL looking in, perhaps it's time to revisit that thought.

Roman Horak is not a top end player at this time; I also think Tim Erixon will be significantly better long-term. But that doesn't mean the Calgary Flames erred in their decision. While Horak failed to score in the pre-season (a horribly inadequate sample size by any measure), he rarely looked out of place, and at times looked like one of the best players on the ice. He was dominant in faceoffs, pretty okay at maintaining possession, and back-checked hard. Hardly the second coming of Joe Nieuwendyk, but perfectly serviceable. That's a rare thing to find in a 20 year old forward whose major accomplishment is 78 points in 64 games for the Chilliwack Bruins (second for the team lead and first in PPG for the B's.)

"Personally, the kid can play. It's tough. When you've got young players who play the game with the skill set he has - who think the game like he does - they're good players. I understand there's contracts involved.

The major contracts Sutter is referring to are Hagman and Stajan: infamous for being the incredibly underwhelming return for Dion Phaneuf. And while a Jeff Skinner-esque Calder season might be out of the question, could Roman Horak prove that angling for him in an inevitable trade wasn't such a bad idea? The jury's still out, but I'm starting to think that Jay Feaster knew exactly who he was acquiring.

Oh, and for your consideration- the greatest Roman scene in Party Down:

Party Down: If her name was "Hooker" Constance, you played a hooker. (via Starz)