A Case of the Mondays: The Ides of Summer Approaching

Share All sharing options for: A Case of the Mondays: The Ides of Summer Approaching

With two days off between Stanley Cup Final games after the Blackhawks' 7-4 win at the United Centre last night gave them a 3-2 series lead, the hockey-less summer doldrums are fast approaching. Without much to report on the rumour front aside from a trade rumour involving an unnamed Flames player that broke Saturday morning (and was subsequently quashed) and no visible progress in the search for an assistant GM, I thought I'd gauge interest in other sports that will attempt to compete for your affections in the all too lengthy absence of our beloved game.

Links after the jump.

KHL Club SKA St. Petersburgh has reportedly offered Ilya Kovalchuk a 3-year, $42M contract (which would pay him $14M/year) [Russian Hockey Fans], but Puck Daddy's Dmitry Chesnokov claims there is "no chance" of Kovalchuk going back to Russia

In other KHL news, 45-year-old Dominik Hasek has signed a one-year deal with Spartak Moscow [CBC] And now, a picture: 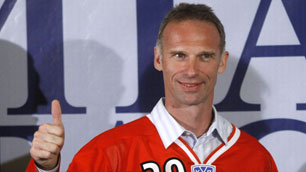 It's that time of year again; free agent wish lists at From the Rink and Fear the Fin

Will Yzerman turn the Bolts into the Red Wings of the Sunshine State? [Raw Charge]

Chris Pronger was -5 in last night's loss to the Blackhawks, the worst single-game +/- of his career [Puck Daddy]

Who should start game six for the Flyers? A case both Leighton and Boucher to get the nod [Puck Daddy]

Marian Hossa's (over) analytical agent? [Behind the Net]

Dissecting the Spezza-to-the-Oilers rumour [The Cult of Hockey]

Mike Keenan has been eliminated from the Devils' search for a head coach, with Michel Therrien and minor league coach John MacLean thought to be the front-runners for the position [The New York Post]

Defenceman T.J. Brodie is the focus of today's prospect profile at Flames Nation, while Pat Steinberg looks at the Flames' restricted free agents

Have a good week everybody and try not to die of boredom as the days without hockey increase in frequency.