With the Flames' year end review still in progress and the first round of the playoffs in full swing, there is still very little to report on the actual activities of the organization that doesn't include heaping amounts of speculation. It's a good thing our Northern neighbours continue to be a source of news and entertainment even after the cessation of the regular season. Yesterday, assistant general manager Kevin Prendergast was let go, and the latest report out of Oilers camp has tongues wagging all across the blogosphere and the MSM, as the organization has announced the firings of head trainer Ken Lowe and equipment staff Barrie Stafford and Lyle Kulchisky, all three of whom have been employed by the team for quite some time. As a fan of a rival team, I haven't been monitoring the situation closely enough to provide meaningful commentary, but the general opinion seems to be that Oilers management is exploiting a series of scapegoats in an attempt to hide their own failings, not exactly something Flames fans are unfamiliar with.

More of today's news including a walking advertisement for wearing a visor in the NHL after the jump.

The New Jersey Devils were eliminated from the playoffs last night after their 3-0 loss to the Flyers in Game 5 of the Eastern Conference quarterfinals, once again raising questions about the play of Martin Brodeur, the Devil's long-standing defence first system, and the choice of Jacques Lemaire as Brent Sutter's replacement. I think the more important issue is that the Devils are approaching Flames territory, having now lost in the first round of the playoffs three years running--welcome to the club, New Jersey! [In Lou We Trust] [Broad Street Hockey]

In other Flyers news, this was forward Ian Laperriere after blocking a shot last night against the Devils: 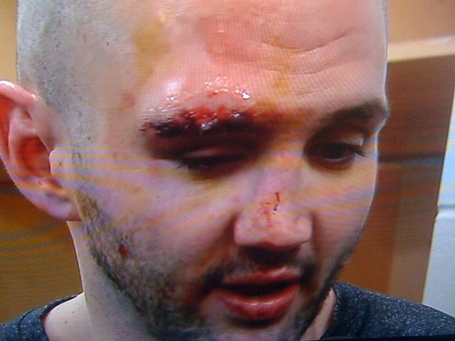 Laperriere required between sixty and seventy stitches to close the gash above his eye and experienced temporary loss of vision in his right eye. He said that he will wear a visor from now on because he "wants to see his kids grow up with both eyes." [via @NHLFlyers]

The Senators live to fight another battle after Matt Carkner's point shot bounced past Marc-Andre Fleury, leading to their 4-3 victory in triple overtime of Game 5 last night. [Silver Seven] [Pensburgh]

The Sharks finally broke out in the fifth game of their quarter-final series against the Colordao Avalanche, turning their territorial dominance into a 5-0 win. [Fear The Fin] [Mile High Hockey] [Copper & Blue (Scoring Chances)]

The Hawks tied their series with the Preds after a 3-0 shutout victory last night. You would think that Chicago held the advantage after two shutouts by Niemi, but he has looked less spectacular in other two games of the series, losing 4-1 and 3-1 respectively. While the Hawks are still the favourites, this appears to be anyone's series. [Second City Hockey] [On The Forecheck]

The Hitmen took a 3-1 lead in their series against the Wheat Kings with a 4-3 victory Wednesday night and look to close out the series tonight at home [Hitmen] The Abbotsford Heat, meanwhile, are on the ropes. After winning the first game of their series against the Rochester Americans, the Heat have dropped three straight games, including the past two by a combined score of 14-5, and find themselves in a 3-1 hole and in danger of being eliminated tonight at home. Injured leading scorer Jason Jaffray could return to the lineup tonight. [Abbotsford Heat]

A great article on the fall of the KHL's oldest franchise Moscow Dynamo with contributions from Puck Daddy's Dmitry Chesnokov [TSN]. If you follow only one of the links in this piece, I suggest it's this one.

An update on the condition of Kris Chucko, who has missed more than half of the Heat's season with Post Concussion Syndrome and a neck injury [Calgary Herald]

After a goal that would have brought the Canucks within one of the LA Kings during Game Three Wednesday night was called off due to "a distinct kicking motion," the tinfoil hat wearing crowd came out of the woodwork, proclaiming a conspiracy against Vancouver. And why not? Ten reasons to plot a Canucks conspiracy [The Hockey News]

What Gary Bettman says and what he means [Lighthouse Hockey]

Jim Playfair's famous tirade may have also attracted the attention of the Columbus Blue Jackets, looking to permanently fill their head coaching position after firing Ken Hitchcock [The Montreal Gazette]

Will the Flames re-sign Vesa Toskala? A look at this summer's UFA goalie market [USA Today]

More questions surrounding the NHL's investigation into the activities of chiropractor Douglas Nagel, who has treated Capitals players and been accused of supplying performance enhancing drugs [Sports Illustrated]

In honour of Shane Doan being a game-time decision for tonight's pivotal Game Five against the Red Wings, Puck Daddy presents you with their second gallery of DoanFace photoshop contributions.