The Marginal Payroll/Marginal Wins (MP/MW) system evaluates the efficiency of a club’s front office by comparing its payroll and record to the performance it could expect to attain by fielding a roster of replacement-level players, all of whom are paid the major league minimum salary. The formula is:

Tyler has ranked the NHL's thirty teams in terms of dollars spent per marginal point over the past four years to determine which teams have spent their money most efficiently. The teams that spend less dollars per point are at the top and the teams that spend the most, towards the bottom. Predictably, the Flames fall somewhere in the middle: not terrible at spending their money, but not terribly efficient either, and by the looks of things, getting worse. They spend to the cap and achieve decent results, much like the teams around them--Montreal, New York, and Ottawa. When I calculated their  Marginal $/Marginal Points for this season alone, it came to a whopping $1,013,822 per marginal point, which would put them near the bottom of this chart, just behind the Kings, if it was based on this season alone. What's more, the Flames have dropped from 12th in the league by this metric at the end of last season to 14th, signifying that Flames management has gotten worse at spending their money efficiently; not exactly a small feat after last season's cap fiasco, when the only thing that saved them from falling any farther down the list was the fact that they had more points than this year's squad. Vancouver, Washington, Pittsburgh, Chicago, and Phoenix are all amongst the teams that improved by this metric this season while Nashville, Detroit, San Jose, and New Jersey are amongst the teams that have remained atop the list. 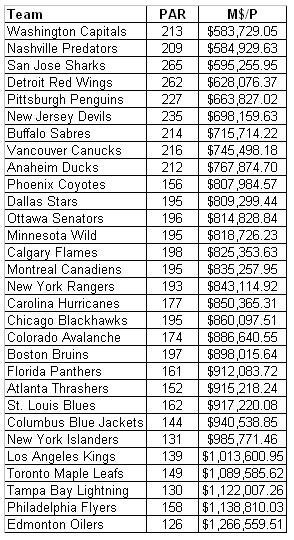 I view this as sort of a double-edged sword. Teams that have rebuilt since the lockout like Chicago, Pittsburgh, and Washington are now forced to spend more under the cap to retain the talent they've drafted and remain competitive and teams like Nashville that are forced to shed salary almost every off season and are still able to ice a competitive team through bargain free agent signings and replacement-level players drafted and brought up through the organization.

Tyler goes on to elaborate on his thoughts on Oilers management:

Since Lowe got his budget increase in the summer of 2007, we’ve basically witnessed incontrovertible evidence that he has zero idea about how to do things efficiently when he’s not forced to. He - and the rest of the hockey people - see a budget as an amount of money that you’re allowed to spend, rather than an amount that you have available to invest in players who will generate a certain level of return.

The problem with Oilers’ management, I think, lies with the thought process and approach that they take. I’ve basically laid out a case here for the past four years that they aren’t good at recognizing value, they don’t understand how the CBA works or how to use it to their advantage and that they completely fail to understand the idea that today’s NHL is an efficiency contest that requires a cold blooded, ruthless analysis of how to spend your dollars and make use of the assets that you have.

This is the area that I'm most concerned about in relation to Flames management going forward. Sutter has presented us with ample evidence that he has struggled to understand the rules of the CBA or how the cap works, particularly after his mismanagement of the cap last season prevented the team from dressing a full roster when it was struck by a series of injuries. It's become apparent that Sutter prefers to allocate the majority of his dollars to older players who fit his criteria of "experience" and "leadership" and fill the remaining roster slots on the cheap; this would be fine if the former performed to the level implied by their contracts and if Flames management were better at assessing and retaining young talent. For every Mark Giordano, Curtis Glencross, or Rene Bourque in Sutter's good-value stable there's a Marcus Nilson, Wayne Primeau, or Ales Kotalik, not to mention the albatross that is Steve Staios--the most recent affront to good value and perhaps the best current example of how not to spend your money efficiently in the cap era when you have an abundance of defensive prospects making league minimum waiting in the wings.

The problem with recognizing value is that it often occurs in hindsight. GMs have to assign a dollar figure to a player based on the market for that type of player versus a set of expectations for what that player will bring to the team--how many points they will produce, if they're a powerplay specialist, if they're a checking forward in a shutdown role, etc--which results in so many players being overpayed. GMs rarely sign a player expecting that he will outperform his contract; most expect that the player will play to his contract, and anything less is considered a bust. That's why we can look at Curtis Glencross and Mark Giordano and Rene Bouque, his new contract nonwithstanding, and say that they're good value. Same goes for players like Mikael Samuelsson and Alex Burrows, whereas we can say that Olli Jokinen was not good value and based on their production this year, Jay Bouwmeester, Jarome Iginla and Daymond Langkow were not good value. Robyn Regehr's contract, which seemed like good value at the time, now appears to be a problem as the soon-to-be thirty year old defenceman's injury history catches up with him and unless Kiprusoff follows up his vezina-calibre season next year, it's safe to assume he will likely follow suit.

Recognizing value in trades is even more difficult because you're giving up something and taking on a new salary based on expectations of what the player in question is going to bring to the team and that it will make up for or exceed the contribution of the player you parted ways with, unless say, you're trading Dustin Boyd for a fourth round pick. Dion Phaneuf was no longer full value compared to his salary so he was traded. What remains to be seen is if Stajan, Hagman, and specifically White can provide better value for their deals than the old #3 after an underwhelming twenty-something games for all but the latter, who may not even be wearing Flames colours next season.

Sutter's carefree doling out of pricey long-term deals and no-movement clauses in the name of loyalty looks poised to hurt the Flames in near future. He's spent to the cap or close to it with confidence and for the most part, without consequence, since its inception with fairly average results, and it remains to be seen whether or not he will be able to wiggle himself out of the latest crunch. I'm not about to compare Flames management to the team that has run the Oilers into the ground over the past four years after one playoff-less season, but Sutter is gradually heading in their general direction and the remainder of management looks to be along for the ride.