I notice it, you probably notice it and it was highlighted by Kent Wilson the other day.  It's time we admitted that the Flames have to throw out a sacrificial lamb each night, just to ensure the other lines survive.

The Flames just don't have anyone to match up with the opposition's top line.

Don't ask me why, but for some reason I get the feeling this is how Olli Jokinen, aka Sex Panther, sees himself.  Unfortunately for poor Olli, the only time he's got to be the alpha male and jack hammer this year was when he was fighting Sam Gagner.

That said, Olli has actually been better than both his linemates (Bourque and Hagman) in one interesting comparison.

Over at Behind The Net, Gabe posted a review of the Colorado Avalanche.  One comparison he used was that of Scoring Chance percentage versus Zone Start percentage.

Click on the image if you want to enlarge it. 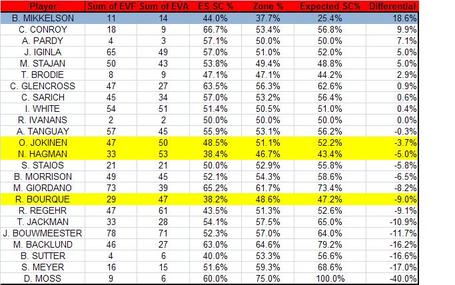 Brendan Mikkelson's value can probably be thrown out given that his Zone Start percentage is for the whole year, but his scoring chance ration is only for the Flames.

Obviously this type of analysis doesn't take into account the opposition, but I thought it was interesting to note that the current "matchup line" (highlighted in yellow) isn't as far underwater as they could be given how much harder their assignment has been.

It's also great to see Iginla and Stajan outperforming their zone starts, with Tanguay essentially even.  This line is doing their job and it's only a matter of time before they get a bit more luck, as I mentioned last week.

Finally, with more players below the expected scoring chance percentage than above, it appears that the Flames are driving possession north and outchancing the opposition, but generally not creating chances at a rate equal to the time they spend in the offensive zone.  They're cycling and taking shots from the outside, but not getting into the dangerous areas.

If there's one thing that's been talked about very sparingly in the first 13 games of the season, it's the Flames goaltending.  After last year's bounceback season from Miikka Kiprusoff and a few solid preseason outings from Henrik Karlsson, it was just assumed that Calgary was solid between the pipes.

With that in mind, let's take a look at the crease-monger stats so far this year.  For those unfamiliar with Quality Starts, check out Rob Vollman's article on Hockey Prospectus, as it's an excellent way to measure goaltender contribution without penalizing them for poor goal support.

Put simply, the Flames goaltending has let them down.  While rookie Henrik Karlsson may get a pass for turning in an ugly performance to go with a solid outing, Kiprusoff needs to perform at a much higher rate.

And before we go talking about how the team has hung Kipper out to dry, let's acknowledge that he's had plenty of offensive support.  In the games Kiprusoff has played, he's enjoyed a 211-to-168 scoring chance advantage with a 148-to-128 chance advantage at even strength.

And it's not like the Flames are losing because the opposition's goalie has stood on his head night after night.  Opponent's goaltending has produced a slightly better than median save percentage of 91.6%.  So if Calgary's goalies could produce an equally average puck-stopping rate, the Flames would have the advantage in most games they've played.

While a lot of the venom has been heaped on Jarome Iginla so far this year, it's Kiprusoff that is performing well below expectations.  With the 6th highest cap hit in the league among goaltenders, he needs to play like it and get his Quality Starts closer to 60%.

Note:  I've decided to make this an every-other-week section.  Looking at team-wide stat trends every 2 or 3 games doesn't tell us much.  Looking at it every 4 or 5 games is at least a little better if not still reacting to natural statistical variability.

The Flames go on the road to face Colorado on Tuesday, Phoenix on Friday and San Jose on Saturday.

While the Flames recorded a brutal comeback loss to Colorado and a jaw-dropping win over the Sharks, they'll face Phoenix for the first time this season.

The best part about the upcoming three game stretch for the Flames is that the three teams are a combined 6-7-3 at home and none are above 0.500 in their own rink.

If there's one player to watch on Phoenix, it's Martin Hanzal.  He has built up a reputation among the stats community of being a heavy lifter at a very young age.  Take a look at his resume for last season along with rank on Phoenix among centermen.

Out of five regular centers on the team, Hanzal played the toughest competition, and started in his own zone a ton. He played with 3rd liners.  Despite that, he came out positive in possession (Corsi per 60) and scored at the rate of a top-9 NHL forward (1.49 Pts per 60).  All this an he's only 23 years old.

The team at Copper n Blue have posted two fantastic articles on building winning franchises in the salary cap era.  The first is Scott Reynold's work on which salary ranges team's have spent their money.  The second is Derek Zona's article on Marginal Playoff Efficiency, which explores which franchises have got the best performance for their dollar since the lockout.

The Flames are actually around league average in MPE in Darryl's tenure, but at Reynolds' analysis shows, they have the 2nd most players in the league under contract for more than $2m per season.

As a small side note, I enjoy the writing of Scott Reynolds as much as any other NHL writer I can find.  Definitely check out his work if you get the chance.