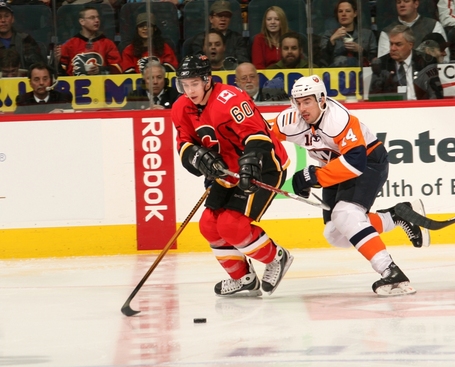 I'm keeping this a bit briefer than the norm due to life getting in the way, so let's get right to the meat of it: When a third of your top nine is hurt, your options are limited, and that where Darryl Sutter finds himself this morning. The fact that the Flames are as thin up front as they are is certainly a fruitful subject for another post, but in the very short term, Calgary doesn't have many cards to play. In that spirit, I don't see much reason for anyone to get too exercised over the recall of Mikael Backlund.

In all honesty, calls for a guy like Jason Jaffray are understandable, but the guy is 28, and he hasn't made the leap. Not everything is an accident. More to the point, with Craig Conroy hurt again, the Flames are in need of a center. With a tight schedule, the opportunity exists to see what the team's best offensive prospect looks like over several games, while doing so in as cheap a manner cap-wise as possible. The Flames play 3 games in 4 nights, so if Backlund is found wanting in any way and gets shipped out after the weekend, the financial ramifications are quite low given that he'd only be on the books for 5 or 6 days total. Seriously, the risk is not that high to have a look at him. If he struggles, send him out and the look-see costs maybe 25k off the cap. If he's solid and rates a longer look, he won't collect any bonus money this year because he won't have the time to hit any targets, so he'd be almost as cheap as Sjostrom. There simply isn't that much downside financially, and competitively, it isn't as if they're playing Chicago, San Jose and Washington the next three games.

According to Rob Kerr, the young man will get a chance to work between Glencross and Nystrom. That's not exactly the indoctrination by fire Elliotte Friedman was suggesting last night, which is likely good. With a center hurt, the likelihood of Backlund being on a line with Joker and Iggy is a bit smaller than it would be otherwise. That's also likely a good thing, because those two dudes working together have nights where they could sink a battleship, and not in the good way. Working with the big two will be Jamie Lundmark's cross to bear, at least to start.

Left Wing Lock shows the starters as Kiprusoff and Auld. I might backpedal on my prediction of McE in this set, with the Oilers on the schedule Saturday. Whenever he gets another airing, I'm looking towards that moment in the manner that I might regard getting a kidney stone again. In other words, once was loads, thanks very much, so I'll pass on any future occurrences.

The Stars are right behind the Flames, and if their defence and/or Marty Turco were up to snuff, they'd have the Flames in the rearview mirror. Dallas has some crew of skilled young forwards at their disposal, with Loui Eriksson, James Neal and Jamie Benn all 24 and under. Sigh. As for their olds, Brenden Morrow is likely to return to their lineup, but Mike Ribeiro is still on the shelf. Hmm. Dallas has a bunch of talented young forwards at the NHL level and lower while Calgary has a surfeit of young D. It's a shame that the Stars are still in the race, because if there were ever two organizations that could balance each other's prospect pools, it would be Dallas and Calgary. Nothing will likely happen this season, but I'd watch them in the summer.

Game wise, I mostly hope that wherever Mikael Backlund plays, people are realists about what he can bring. A smart game where he doesn't press would be optimal, and it would also be a bonus if his teammates play well enough around him that when he gets an occasional bad match-up (i.e. vs. Richards), it doesn't turn into a gong show. Oh, and a win would be nice as well.

Game time is 6:30 MT, and no TV, so it's a night with Peter Maher or whatever whims the series of tubes may present us.