Share All sharing options for: Some Sanity in the Haze of Frustration and Anger - The Flames Aren't THAT Bad

Some of the more even-keeled of the commentariat around these parts is resisting the urge to toss the team overboard in the wake of the terrible defeat to the Sharks. It's a sensible response. Calgary has played better hockey in many of the past weeks than they did early in October and November when they were winning games because of a high SH% and apparently immortal goaltender.

The goals - and wins - have been hard to come by recently. In some ways, it's brought into focus many of the concerns I and a few others here had since the start of the season. However, in other ways, the angst is overwrought. There have been some rather positive signs recently and it's largely the fickle hand of fate that's been goosing the results to Calgary's detriment. It's the same randomness that granted Calgary a bunch of un-earned wins when they weren't playing all that well, so it's difficult to get too angry about it.

I'm often described (derided?) as a "stats guy", so here's some quantification of what's been going on. Via Hockey Numbers: 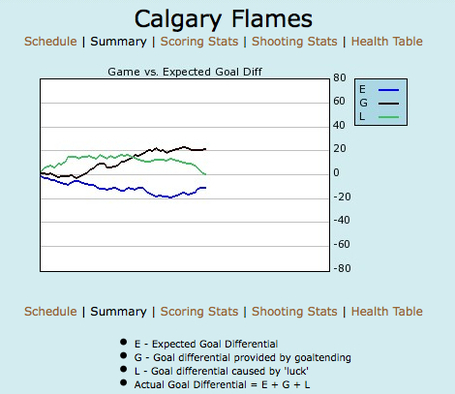 Java Geek (recently referenced in the book Hockeynomics) runs Hockey Numbers and tracks shot quality and volume for each team in the league. What you see here is a representation of the Flames even strength goal differential, broken up into three contributing factors: goaltending, "expected" (as derived from the amount and quality of shots the Flames both generate and allow) as well as "luck" (or randomness). As you can see from the legend at the bottom, actual differential is a sum of all these factors.

We'll spare the overly mathy explanations for how he gets to these values for now. anyone who has followed the team closely this year, and reads this space regularly, should be struck with how well the above graph tracks with Calgary's season thus far: low expected goal differential (due to poor shot volumes, quality of shots), high goaltender contributions (of course) and high luck contribution (more pucks going in than would normally be expected).

They should notice, too, that the Flames "luck" has cratered recently according to Java Geeks model, while their "expected" goal differential has increased. Meaning the thing that is mostly under the teams control - getting shots on net, generating quality chances - has actually improved recently relative to most of the season. That at least is an encouraging trend.

Of course, the good feelings pretty much end there because it's fairly clear that the team's expected goal differential continues to be fairly substandard. So while the recent theoretical uptick suggests the team isn't all that bad, the truth is they are probably just mediocre overall. But that's been true most of the year.