Another sample to add to our growing set, I present the most recent decade of scoring chance differentials. I apologize for not posting this earlier, but the Flames hectic schedule has preventing me from getting after this topic.

This data sample sees some reversal or prior trends. It encompasses the time period between December 13th (versus COL) and January 2nd (versus EDM) and includes the terrible 5-1 loss to Vancouver as well as a portion of the turn-around thereafter. Cory Sarich was injured during this period and, I believe, Daymond Langkow played with Iginla while Jokinen was moved down with Bourque. Craig Conroy was also injured for awhile, resulting in the promotion of Boyd/Nystrom to the third line. This is also about the time the third unit began to lose effectiveness. 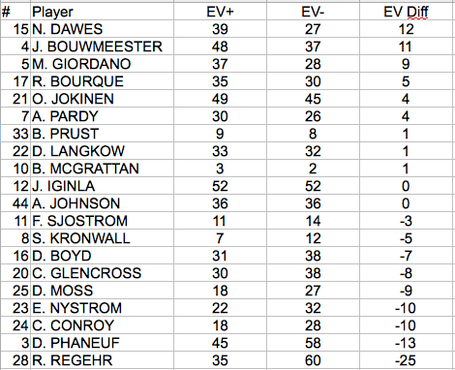 (Keep in mind, this is all just even strength)

The Dawes/Langkow/Bourque unit continued to be solid through this segment, while Jokinen and Iginla made some modest gains over their previous efforts. Sjostrom and Nystrom continue to be your average, run-of-the-mill replacement level 4th liners, while Prust actually comes out pretty well by this metric.

A couple of issues jump out here:

1.) Conroy and Glencross fell off a cliff during this segment for whatever reason. Moss wasn't much better. I don't recall their circumstances changing all that much, so one wonders why their chance differentials (and probably cori rates) faltered to this degree.

2.) Phaneuf and Reggie saw the toughest ice time and got eaten up. The two were managing pretty well earlier in the season, especially when Bouwmeester was sharing more of the load, but it looks like Butter preferred to give them the toughest minutes more often in December. That's what this suggests to me anyways.

About half way through the year and we can see that many of Calgary's biggest contracts struggled by this metric. Iginla and Jokinen held their heads above water in this segment, but were so far behind that it didn't make much of dent in their total differential. Moss continues to lag behind last seasons performance while guys like Bourque and Langkow have basically been carrying the mail in the top 6.

I didn't put together rates this time, but can if it's of interest to everyone.