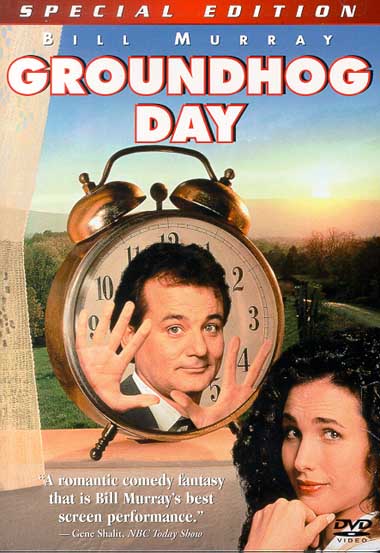 Groundhog day is one of my favorite Bill Murray flicks. The premise, the execution, his comedic timing...

The Flames have lost to COL three straight times this season by a score of 3-2 each time. By the end of the third meeting, Calgary may have felt like they were stuck in their own endlessly repeating gray winter morning: in each loss, the Flames spent the night in the offensive zone being frustrated by the Av's relentless shot-blocking, only to see the bad guys pop a few at the other end. I know it's been bloody frustrating to watch, so I can't imagine what it's been like to play.

The good news is, Bill Murray eventually figured things out by the end of his Gourdhog day. The bad news is, the Flames won't have an infinite amount of opportunities to get things right...

Stuff to watch for:

- How improbable is the Avs season thus far? Four of their regular forwards are 22 years old or younger (Stewart, Duchene, Galiardi and O'Reilly). Two of them are teens. And they've spotted another 3 rooks in the line-up throughout the season (Yip, Wilson, Durno). That's crazy folks. It's absolutely incredible they are where they are in the standings right now.

- The Lundmark debate is heating up in town after his stand-out performance Saturday night. I'm willing to bet that he'll get a bunch more time as Conroy recovers and will come back down to earth (as is his habit). That'll likely spell the end of the debate.

- Related: Jokinen+Iginla put up maybe their best performance in terms of possession all year against Vancouver. Against some very good players to boot. That said, I'm still not sold that that is winning strategy long-term. We'll see how they do tonight against Wolski/Stastny.

Comments are, as usual, welcome.