Share All sharing options for: Flames vs. Canucks - Questions Remain 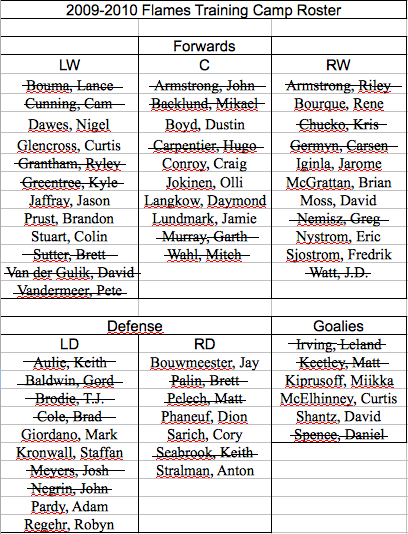 With the Fleury saga officially over, there still remains lingering battles for jobs in Flames camp. In what I would consider perhaps the most interesting and contentious pre-season in Calgary in recent memory, there are several legitimate question marks surrounding various areas of the roster. In fact, the final contest this evening against the Canucks probably won't be enough to answer them.

If anything, the exhibition season has muddied the waters when it comes to the top 6 issue. Nigel Dawes has been both good and bad in equal doses, Dustin Boyd has been injured, David Moss showed well in limited viewing and Curtis Glencross threw his hat into the ring by leading the Flames in scoring and frequently being one of the best skaters on the ice. Rene Bourque, whom many assumed would be a lock for a scoring role, has been fairly invisible over the last few games, although he was only recently cleared to return to duty thanks to that lingering high ankle sprain and may be working through some rust.

I suppose the good news is the Flames have several options and no "resevered" spot for an one-dimensonal Todd Bertuzzi-like anchor, meaning merit will be the only deciding factor for whoever wins the job.

This is where things get really confusing. Last game against the Edmonton Oilers highlighted why having a functional bottom end of the rotation is useful. Jaffray, Prust and Stuart spent a lot of time in the Oilers end and scored a goal for their troubles. All three are probably NHLers. Unfortunately for the Flames, so is Jamie Lundmark, who refuses to good gently into the AHL, as well as Dustin Boyd, who technically should be designated for a top 9 role, but may be relegated to the 4th unit for the time being.

Then there's the quandary of Brian McGrattan. He's injured, he's the worst player by a good margin on the roster...but he has that one-way contract and an ostensible "role" to fill. Fortunately, at least one of these guys will probably get a look to start the season given that McGrattan will be sidelined for awhile. Unfortunately, one of them will likely be sent down - through waivers - to Abbotsford once he's ready to return.

Stralman, Kronwall and Pardy are hanging around and at least one of them is going to have take the short flight to BC after tonight. Despite his lackluster performance(s) thus far, Pardy has a low jersey number and a lot of good will - he's a fixture (for now).

Between Stralman and Kronwall, my own observations suggest Stralman is the superior choice. Not only have I liked his game better, but he's much younger, has a higher upside and is more likely to be snagged on the waiver wire should he be demoted. Kronwall hasn't looked terribly out of place, but he hasn't stood out either and I think his foot speed is an issue. Stralman looks fast, agile, calm with the puck and capable of manning the power play. He's been knocked down in board battles a couple of times, but given he'd be a 6th or 7th defenseman on this club, that doesn't overly worry - not as much as Kronwall's lack of speed, at least.

Some difficult decisions lie just ahead for Sutter & Sutter. Some guys may make things easier (or tougher, for that matter) this evening, but nothing will be settled after tonight. Some of these battles may endure all season long and it may take an injury or two to clear things up. Despite what appears to be belly-aching on my part I hasten to add that these are the types of problems you want to have during training camp and they speak well Sutters work this summer (McGrattan signing aside, of course).