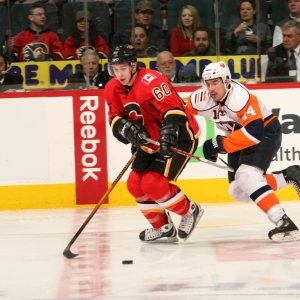 With training camp opening in earnest Sunday morning, it seemed like a good time to continue this series with a look at some of the players who seem likely to feature in Abbotsford this year. The Flames appear to have made a concerted effort to bolster their farm team with some veteran signings, and with a number of junior prospects making the move to the pros, it should make for an interesting year on the farm. Given the meager results in the last two years, both in terms of player development and on-ice AHL success, that's all to the good.

A player who still holds out hope for starting the season in Calgary is Mikael Backlund. After the jump, I'll look at why he and the team may well be better off if he spends some time in Abbotsford.

Last season was a somewhat unsettled season the Flames' first pick from the 2007 draft. He started the year playing for Vasteras in SWE-1, struggled, ran afoul of the coach, and ended up moving to Kelowna to play for the WHL's Rockets after the world junior tournament. His time in the Okanagan certainly went well in a team sense, with the Rockets reaching the Memorial Cup final before falling to Greg Nemisz' Windsor Spitfires.

His individual performance was decent enough as well, with 30 points in 28 regular season games, 23 points in 19 playoff games, and 4 assists in 4 Mem Cup games. 57 total points in 51 games comes out to 1.12 PPG. Over a 72 game season that adds up to 81 points. I know that combining regular and playoff games isn't entirely fair, but at least it increases the sample size a bit. With that stated, let's try to put some context to those numbers by looking at the some of best of the WHL last year, as well as the last junior seasons for Dustin Boyd and Nigel Dawes.

81 points would have put Backlund in a tie for 16th in league scoring, one point behind teammate Jamie Benn. Dallas' 5th rounder from  '07 produced 82 points in 56 games to lead the Rockets. The Rockets were 5th in league scoring with 267 GF.  Notables who had higher point totals include 2008 Buffalo 1st pick Tyler Ennis (85 P/ 61 GP/  249 GF), as well as 2009 draftees Braydon Schenn (88P/ 70G/ 295GF) and Evander Kane(96P/ 61G/ 319GF). Backlund's numbers look good overall, but he was a 19 year old in junior hockey, so if he's any kind of NHL prospect, his numbers should be good. He was about on track with '08 draftee Mitch Wahl, BTW. Wahl had 67 points in 63 games during the regular season for a Spokane team that scored 244 goals, and followed up with 13 points in 12 post-season tilts. As an FYI, Gabe Desjardins of Behind the Net calculates the NHL equivalency for WHL point totals as .30, so Backlund's 08/09 would have translated to just under .34 PPG, or about a 27 point season over 82 games.

Next, let's see how Boyd and Dawes did in their final seasons in junior. Boyd had a pretty famous last year in Moose Jaw that included a fine  '06 WJHC in Vancouver. He amassed 90 points in 64 games (1.41 PPG) for the Warriors that season on a team that scored 278 goals. Nigel Dawes also had an excellent 19/20 year old season. He was part of the renowned '05 World Junior Champions, and scored 76 points in 63 games (1.21 PPG) for a very solid Kootenay Ice team that won its division before falling to a Shea Weber-led Kelowna squad in the WHL Western Conference final.  What's doubly notable about Dawes' season was it included 50 goals in a WHL that was a much lower scoring league at the time. Kootenay's 218 GF was 5th in the league that year, so Dawes scored 23% of their goals.

I'm not condemning Backlund to the also-ran heap by any means simply because he didn't put up better numbers than Boyd, Dawes or certain other WHLers. It just seems that expectations of the young man should be tempered a bit until he proves he's clear of Boyd or Dawes from a developmental level. When I looked at his numbers vs. Boyd or Dawes at the same age, I was mindful of the fact that last year was Backlund's first in North America, with all the adjustment that entails. By comparison, Boyd and Dawes were 4 year WHL veterans at the same age, so they were fully acclimated to the physical style and endless bus travel that characterize the Dub. Still, there isn't enough past evidence suggesting he's a leading candidate for a role in Calgary's top six. Unless he's made unbelievable progress over the summer, the Flames are in a lot worse shape than anyone would suspect if Mikael Backlund makes the team. The Flames are a veteran group looking to limit GA. Having a rookie fresh out of the Junior ranks doesn't seem to match with that M.O. unless there's clear evidence he can outscore the opposition. As the old pool-playing adage goes, "it ain't what you make, it's what you leave". There's certainly plenty of historical evidence out there that suggests most young players entering pro hockey need work on their two-way game, and I haven't seen or read anything suggesting Mikael Backlund is immune to that phenomenon. Players like Dawes and Boyd have a lot of the growing pains worked out, so they should be a step beyond him in their own end, and will likely be safer bets for this year. There really isn't any hurry to promote the young man before he's ripe.

So a year in Abbotsford seems like the proper developmental track for Mikael Backlund. There really isn't a downside in my eyes for this path. He gets to continue his adjustment to the North American game, work on his two-way play, and learn to be a pro hockey player in a pretty difficult league. Abbotsford will almost certainly be a better team than last year's Quad Cities outfit, but they will have some terrible travel this year, and it won't be at the deluxe level NHLers enjoy. As a marker for the young man's progress, Dustin Boyd had 60 points in 66 AHL games in 06/07, and Nigel Dawes had 67 points in 77 games for Hartford in 05/06. FYI, Desjardins NHLe for the AHL is .44. If Mikael Backlund is clear of those numbers this season, he'll be a possible call up this spring, and should have a good shot at a regular role next year. He has some legitimate offensive gifts, but they would be best honed by developing him in an orderly fashion. If he can whip the grown-ups in the AHL this year, we can start talking about his NHL prospects in a realistic manner.

I had every intention discussing some reasonable expectations for John Negrin, Keith Aulie, Keith Seabrook, Leland Irving and Matt Keetley in this installment, but I have an early tee time this AM ;-) I'm also a Winnipeg Blue Bombers season ticket holder, so I watched this utter fiasco on Sunday afternoon. I've had about enough for one day, thank you very much. Abbotsford's potential new defencemen and the goaltending situation on the farm will get a look-see in the next couple of days.