Share All sharing options for: QC Flames Quality of Competition

Gabe Desjardins recently created a Quality of Competition stat for last year's AHL season, similar to the one he employs for the NHL over at behindthenet. It's not quite the same, because the quality and level of data available from the AHL isn't quite up to snuff, so it's based on Jonathan Willis' approach which does tend to correlate well with Gabe's process. Neither is perfect, but, as the saying goes "it's the best we have right now".

Anyways, I combed through the database and put together the QC Flames results - many of which surprised the hell out of me, to the degree that I am questioning the findings. 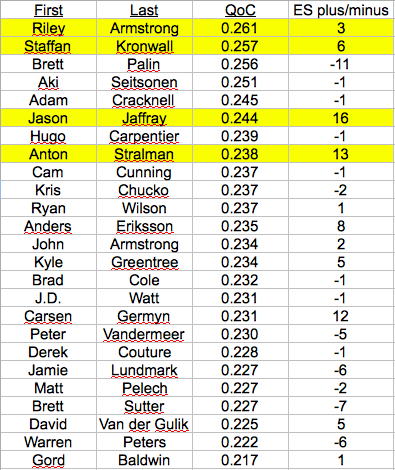 - The players are listed in order from toughest to weakest competition. The range is seemingly small (.261 - .217), but the truth is a tenth of a point is significant through this method. For example, Riley Armstrong's .261 QUALCOMP was in the 80th percentile in the league while Baldwin's .217 was in the 7th percentile.

- I've highlighted new comers that weren't on the club last year. Take their QUAL COMP rating with a pinch of salt, since rankings don't seem to to translate well across teams. Good to see all of them were in the black in terms of ES plus/minus though.

- The Flames rankings don't make a lick of sense to me, based on what I know about the players. Seitsonen, Cracknell and Carpentier facing the toughest match-ups? Vets like Van Der Gulik and Germyn at the bottom? Palin facing the toughest competition on the team, while Pardy doesn't even break-even against bottom-tier guys?

All I can, is: if this is representative of what happened last year - yikes. The team was clearly lousy based on the fact that most of the players were underwater at ES...but, from what I can determine from this and assuming sample size issues aren't scuttling the results completely, it looks like McGill spent the year either rolling all 4 forward lines without regard for match-ups OR he concentrated mostly on generating favorable conditions for his modest stable of scorers and fed the rest of the patch-work group to the wolves. I mean, really...JD Watt shouldn't be playing against anyone of any ability. He's an ECHL level hockey player. And yet, there he is, ahead of guys like Lundmark and VDG.

- Gabes spreadsheet included some other information, including 5on5 and 5on4 scoring for each player which I excluded in the above table for the sake of clarity. Issues of interest: Kris Chucko actually scored more ES goals than Kyle Greentree* (18 to 11), who apparently garnered most of this totals with the man advantage. That alters my perception of Greentree as one of the top prospects in the system for sure and moves Chucko up a peg.

*(caveat - data was actually missing from some of the AHL gamesheets, so not all of Greentree's goals were accounted for. There's a chance he actually equalled - or surpassed - Chucko's ES totals, but we can only work with what we're given).

- Im stunned to see VDG at the bottom of the list. At least he was one of few regular skaters to outscore the bad guys I guess.

- Based on this, I'd have to say Matt Pelech is further away than I thought. He played most of the season, was relatively sheltered and had very marginal results. He looked alright in very limited NHL action last year and he seemed head-and-shoulders above the other kids at the prospect camp, but...for someone supposedly knocking on the door, he sure didn't get a lot accomplished last season.

- A corsi rate for these players would be really, really useful. As far as I know, the AHL doesn't track shots well enough to develop that measure, however.

- Finally, we can see why Sutter concentrating on firming up the farm team this year. Last year's group, even with guys like Greentree and Lundmark playing better than expected, was awful. The additions of Backlund, Jaffary, Armstrong, Negrin, Seabrook, Kronwall and Stralman will likely make this a vastly improved club.