The Falconer has an interesting post on contextualizing corsi rates. I suggest reading the whole thing, but the part I'll be replicating for the Flames is the chart which plots each player's zone start versus corsi rate, creating a visual representation of who was driving possession and in what context. It confirms a lot of what we know about the team already, but it's interesting nonetheless.

I've altered the format slightly to show zone start (offensive - defensive zone face-offs) and corsi rates/60 minutes of ES ice, rather than "net shots attempted" which is in the original. The outcome is about the same I think. 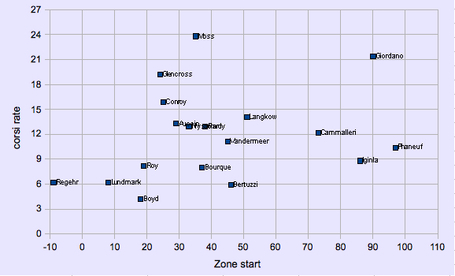 As you can see* (and as we all knew), Moss et al. drove possession despite starting in the good end of the rink a lot less than guys like Iginla and Cammalleri. Giordano and Phaneuf were gifted some of the easiest zone start numbers on the club, but Gio's corsi rate was far superior.

*(if you can't read it, the mess of players jumbled together in the middle of the chart is Nystrom, Aucoin and Pardy)

Another layer of context to apply to this would be quality of competition. While Moss' line kicked some serious ass, guys like Iginla and Bourque were no doubt facing much stiffer competition. Other items of interest:

- Dustin Boyd had one of the smallest zone start numbers on the club. Obviously Keenan was saving offensive zone draws for the likes of Iginla and Cammalleri, but it's funny to see him lagging behind a guy like Nystrom. It'll be interesting to see if this changes under Brent Sutter.

- Todd Bertuzzi had a moderately favorable zone start number, good linemates, some of the easiest competition and yet a mediocre corsi rate. Notice how he and Lundmark are about equal?

- How much of Gio's astonishing corsi rate is circumstances (high zone start, playing behind Moss) and how much of it is him driving the results?

- Robyn Regehr was an island unto himself last year. I'm guessing that changes somewhat with Bouwmeester in the fold.