Now that the two big off-season events are all but over, it's time to get into the intense summer navel gazing that fills the long hours between now and pre-season.

First up, a look at the Flames forward prospects. I've ranked 18 of Calgary's hopefuls according to their most recent offensive output, via a couple of different methods.

First, here are the kids NHL equivalence scores based on Gabe Desjardins work. I did something similar for this post last year. Here's the chart, with discussion afterward:

- So what I've done is multiplied the players PPG pace from last season by Gabe's NHLE rating of the league (the percentage of offense that is typically carried forward from league X to the NHL) and then multiplied the resultant "expected" PPG pace by a full 82 game season to give us an expected output.

- Keep in mind, we're assuming a lot of stuff here - for example, we could have expected Greentree to score about 35 points at the NHL level last year, assuming he played a similar role as he did on the farm. Obiviously this wouldn't be necessarily true.

- Age is a significant factor when considering the viability of prospects and projecting them forward. In another article, Desjardins notes:

Does it matter how old a player is when he puts up big numbers in Junior?  Obviously it does – Wayne Gretzky had 70 goals and 112 assists in 64 games for the Sault Ste Marie Greyhounds as a 17-year-old in 1977-78.  Seven years later, Dan Hodgson had the exact same statistics when he was a 20-year-old playing for the Prince Albert Raiders.  Hodgson was drafted 83rd overall despite his prolific scoring, and had 74 points in a 114-game career.  (He is still active in the Swiss National League.)  At age 22, Hodgson had 57 points; Gretzky had already scored 1024 points between the and WHA.

So in a qualitative sense, it’s obvious in this case that a 17-year-old player’s performance predicts a much better career than a 20-year-old’s stats.  But there is also a strong quantitative relationship between past and future performance.  Based on the performance of thousands of drafted players, we can predict how many points a player will score in the when he’s 21-years-old.  If he’s 17, four years later, we expect him to score at 72% of his junior rate.  But if he’s 20, on average, he’ll retain just 26% of his scoring.

So while the NHLE I have above is kind of "what would the player do if he made the NHL tomorrow" inquiry, keep in mind that age is a very real issue when projecting the same guy years down the road. As such, players like Greentree, Chucko, Grantham and Cunning are closer to their ceilings than the various teen-agers.

In order to put some meat on the bones, I decided to swipe Willis' "percentage of GF" method of evaluating prospects, described here. In short, by taking the players point total as a percentage of the clubs total goals for, one gets an idea of the "weight" of the guys offensive contribution - was he driving the bus or just riding coattails?

- I had to make some adjustments with some of these figures. Backlund, for instance, played 28 games for Kelowna in the RS and 22 games in the play-offs. Both times, the team had a different scoring totals and rates so the GF number you see (182) is a hybrid of the two.

- I had to do something similar for Ryley Grantham because he was traded part way through the WHL season.

As a final step, I decided to make a total ranking based on the two methods above. basically, I gave each rank a "score" in each analysis based on the number of players: 18 for first place, 17 for second place, etc. Then I summed players scores to yield the final ranking: 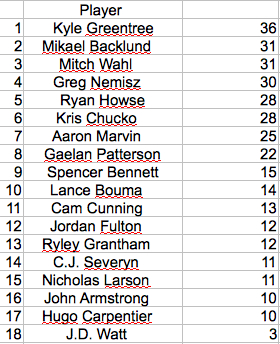 - Greentree placed first through both methods, lending credence to my suggestion that he was one of the better prospects in the system despite his age. Obviously guys like Backlund, Nemisz and Howse have time and development on their side, but Greentree is no doubt the most "NHL ready" of them all.

- I would have liked to see Mikael Backlund do better, given the high expectations and his age. It was a screwy year for the kid though and his sample size was limited to just 47 games in the WHL. That said, this suggests he probably isn't a viable option for the big club next year even at an offensive level; nevermind the defensive issues that rookies usually struggle with.

- Mitch Wahl rarely gets mentioned in other circles as an attractive prospect, but whenever I investigate his numbers or scouting reports, he looks like one of the best assets in the system currently.

- Anyone below Aaron Marvin on this chart is probably a long shot to make the NHL, let alone make any sort of impact I'd say. I know a lot of Flames fans seem high on John Armstrong due to his nice showing in the pre-season last year, but his results are really discouraging.

- Remember that this stuff excludes a lot of context: we don't know how much ice time guys were getting in various roles (ES, PP, PK) nor who their line mates were. This is also purely offense based and probably wouldn't do justice to a guy like, say, David Van Der Gulik who I excluded for that reason. A player like Lance Bouma might also fall under the same umbrella.

- Im still a little dubious of Greg Nemisz. The fact that he didn't really take much of a step forward as 19 year old on an amazing team raises questions. If he can put up a dominant performance as a 20 year old on what will likely be another juggernaut Spitfires club next year, I'll be more encouraged. That said, he's still appears to be one of the better prospects in the system.

- Excluded were defensemen and Henrik Bjorklund. The former because offensive output doesn't really say much about defensive prospects outside the PP quaterbacks and the latter because his stats from SWE-3 league weren't going to be of much use.