Share All sharing options for: Scouting the '09 Draft - David Rundblad 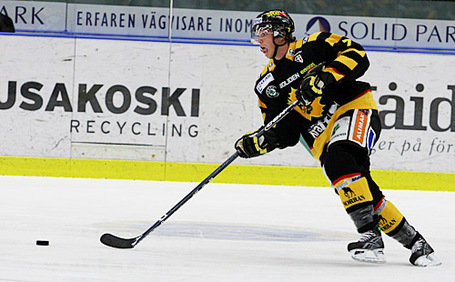 One of four Swedish defensemen projected to go in the top 30, Rundblad is a step behind Victor Hedman and Oliver Ekman Larson on most lists and mock drafts. The general consensus is he'll be available in the 15-20 range, so it's possible the Flames are looking at him. The 18 year has already played 51 games in the Swedish Elite League, which is a big indication that he's ahead of the developmental curve. The SEL is one of the toughest hockey leagues in the world - any kid that can hold his own and play a regular shift against mature, professional players at that level is probably a few steps up on most of his cohort.

Rundblad played 45 games for Skelleftea HC, recording 10 assists. The scouting reports I've read indicate the 6'2" rearguard is a smooth-skating defender that can pass or skate the puck out of trouble and through the neutral zone. From Director of European Scouting Goran Stubb (via NHL.com):

"He has a very good shot. He is a right-handed shot and he is used on the power play, even in the (Elite) League despite being a young player. He is a very smart player. He could be a little more physical in his game, but that is something that he is learning."

David Rundblad is one who is fluid on his skates, he likes to take the puck from one end to the other. He is a smooth transitioning d-man, gets the puck out of the zone and generates offence, loves to jump in on the play. He has a decent shot and is proficient on the PP, his best asset though is his skill with the puck and generating the rush.

As if to prove the reviewers contentions, this video was included:

Rundblad is player that made the initial deke which evoked an "ooohh" from the crowd.

This player hits a lot of Sutter sweet spots - Swedish, big, good skater. The organization has made a concerted effort to acquire smooth, puck-moving defenders in recent years, most notably with the John Negrin and TJ Brodie picks.

While the Negrin/Brodie marked an observable move towards "puck movers" on the back-end by the Flames, it also means the organization has two similar players around the same developmental level. Overall, Calgary has some nice defensive futures already in the hopper with the two aforementioned guys as well as Pelech, Aulie and Palin bubbling underneath Phaneuf, Giordano and Pardy who already on the big club. Sutter and company may feel that adding another forward to the club's improving but admittedly still thin group of futures up front may take prescedent, therefore.