Share All sharing options for: Scouting the 09 Draft - Chris Kreider 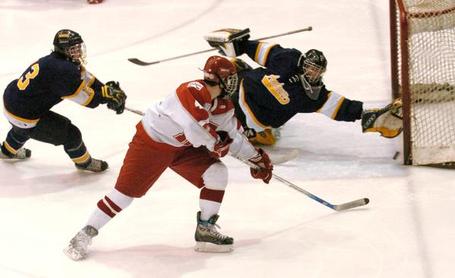 A big, American kid who played HS hockey this past season, Kreider is ranked 14th amongst NA skaters by NHL Central Scouting and has some glowing qualitative reports following him around the al gore. A 6' 2" and 200 pounds, Kreider is already an intimidating package at just barely 18 years old.

Kreider dominated his peers for Andover Prep School this year, scoring 33 goals and 56 points in just 26 games. Obviously, high school hockey is several steps below the other amateur leagues, but those numbers are difficult to ignore nonetheless.

According to most scouting reports I've seen, Kreider has a strong compliment of offensive tools: good shot, fast release and good skating. According to NHL Central Scouting's Gary Eggelston, Kreider

..."is an excellent skater with explosive speed and acceleration. His short-distance speed is exceptional. He sees the play ahead of time and knows what he's going to do with the puck as soon as he gets it. He is an excellent passer and playmaker. His foot speed, combined with his anticipation and quick stick, gives him the ability to create turnovers and gain puck possession. He is a constant threat to develop breakaways on the penalty-killing unit. He has both an excellent wrist and slap shot, which he disguises well and releases quickly. He can score goals in a number of ways."

In addition, Andover coach Dean Boylan described Kreider as a "great character kid with a presence in the lockerroom". Somewhere, Darryl Sutter is nodding his head and smiling.

Chances are good that Kreider will go the college route and is likely to be a longer term project than, say, kids in the CHL. That probably won't be a big issue for the clubs picking in the latter half of the draft when he'll likely be available however.

Nice package of physical tools as well as size. The fact that his game doesn't have a glaring weakness could be enticing to Flames scouts.

Playing in a 2nd (or 3rd) tier league means it's tough to scout Kreider's abilities in the context of top notch opposition. It's one thing to beat up on HS students for 26 games, and quite another to face the best your age cohort has to offer and still excel. In addition, the Flames were burnt by a similar pick in Kris Chucko a few years back after the former first rounder beat up the competition in the BCHL. He's been no better than middling at every other level of competition, however, so Sutter el al may be wary of guys who look like superstars in lesser leagues.