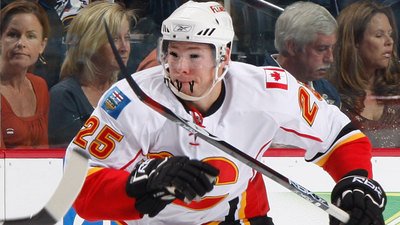 I plan to break up my season review into a number of sections, because a single post would be overly long, rambling and tangential.

In this, the first of two parts, I'll to look at the team - that is, the players on the ice - in isolation, before proceeding to coaching and management.

Heading into the year, I offered three main predicitions based on the moves Sutter had made that off-season: the bottom 6 forward group would get better, the top 6 would get worse and Kiprusoff would continue to decline. Seeing as they proved more or less accurate, I'll proceed with this framework on mind.

Despite the disappointing final 6 weeks and first round exit, let's start with what went right this year, because it was a lot and it speaks well of the Flames future.

The charge forward was led by the likes of David Moss, Curtis Glencross, Craig Conroy, Dustin Boyd, Eric Nystrom and, before he was dealt, Matthew Lombardi. Three of these guys scored more than 2 ESP/60 (Lombardi, Glencross, Conroy), with Moss knocking on the door (1.81). Nystrom and Boyd are still finding their footing, but neither of them was underwater in terms of corsi this year, which is all you can ask of guys on the 4th line.

Of course, the true star of the show was the Glencross/Conroy/Moss unit, which was perhaps the best trio on the team in many ways this season. Conroy's 2.73 ESP/60 rate was top notch, as was his plus/minus (+11, corrected). I've been tough on the old dog in the past, but he provided tremendous value for his $1M salary this year. Moss and Glencross put up lesser production rates, but, on many nights, they were truly the engine driving the team forward. That deadly duo were one/two on the Flames forwards in terms of corsi rates (23.8 and 19.2 respectively) - rates that ranked amongst the leagues best players including Pavel Datsyuk (+23), Marian Hossa (+22.5), Alex Ovechkin (+19), Ryan Getzlaf (+16.6) and Zach Parise (+16.6). For certain, Moss and Glencross were getting the job done against lesser opposition than the elite players listed here, but that's heady company nonetheless for a pair of guys that earned $1.775M combined last season.

The Flames also benefitted from the expulsion of boat anchor Eric Godard and the fact the rotating cast of stand-ins and replacements were at least capable NHLers (in small doses). Lundmark, Van Der Gulik, Peters and even Roy (to a nominal extent, given he was the hired goon) weren't throbbing liabilities when they were called upon. In fact, the three AHLers made strong cases for a permanent promotion this coming October.

As such, Calgary was a very strong possession team at ES during the regular season. No skater was in the red in terms of outshooting and everyone took more offensive zone draws than defensive zone draws. The puck was frequently moving the right way this year, which allowed the club to outscore some of it's obvious weakness. Even with Iginla having his "off" season, the Flames finished with 167 GF at 5on5, behind only DET and BOS. Keep in mind, the percentages were very kind to the Bruins this year and not so much for Calgary: the Flames did it through pure possession and outshooting . That's good news.