This will be another "pillar post" for this summer's on-going commentary.

Anyways, Joanthan Willis did this for the Oilers roster a few weeks ago and it struck me as a worthwhile excercise. Adjusted (or corrected plus/minus) does two things:

1.) it excludes stupid stuff like short handed goals or empty-net goals which are more about chance and don't really tell you much about a player's ES ability.

2.) It normalizes ES SV% behind each player. Current thoughts on on-ice SV% at ES are a players effects on SV% are largely drowned out by random variance (the bounces) to the degree that the noise is louder than the signal.

Anyways, to the figures: 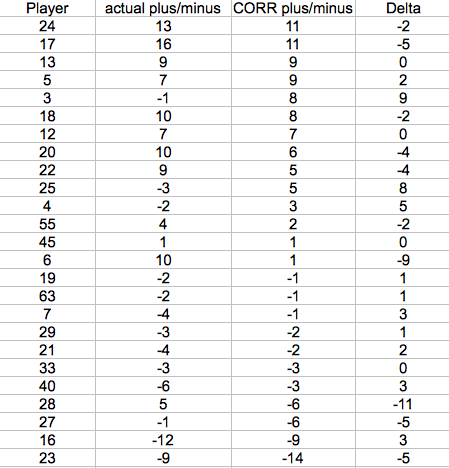 All ES numbers taken from time on ice. Keep in mind, these stats include all ES situations, including 4on4 and 3on3. All players SV% was adjusted to .908, which was the team average.

I've listed the players from best to worst in terms of the corrected rating. Conroy comes out on top, with Nystrom bringing up the rear. In terms of the biggest movers, Dion Phaneuf (+9 diff), David Moss (+8 diff) benefited the most, while Nystrom (-5 diff), Bourque (-5 diff), Sarich (-9 diff) and Regehr (-11 diff) were the "luckiest" Flames this year. Notice Bourque was still tied for second on the team in terms of plus/minus, despite losing a few ticks to the correction.

Keep in mind, this process isn't perfect, but it gives us a bit more context to work with. Ideally, we'd like to see the quality of shots against with each player on the ice and to determine expected goals against and such, but...baby steps.