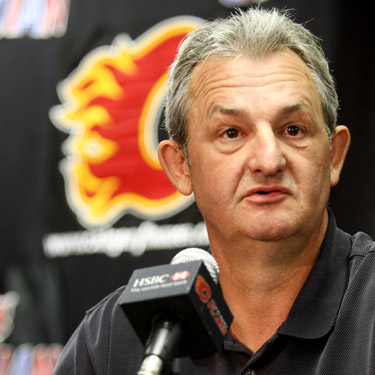 I struggled with the Sutter portion of my year end review because, frankly, I've gone over a lot of it before.

At this point, five years into his reign as the Flames GM, Sutter's proclivities as a manager are scrawled in big, bold letter across the face of the organization. His cowbells are enduring and obvious: former "Sutter" players, Western Canadian boys, first round draft picks and "character players" (with a passing tolerance for Swedes and Fins).

And what seems to become clearer and clearer with Darryl at the organizations helm is his weaknesses tend to undermine his strengths, resulting in a sort of tedious, year-after-year equilibrium. Every time the club seems to take a step or two forward in one area, it falls back a step or two elsewhere. Since the hallowed Stanley Cup run, the Flames have cycled through the league's ceiling and basement in just about every category: goals for, goals against, special teams, etc. They finished 3rd, 8th, 7th and 5th in the Western Conference in each of the seasons since the lock-out and never once advanced past the first round. This is despite an ever ballooning budget, keep in mind.

This past off-season, Sutter made some excellent moves for quality, high value players. Rene Bourque and Curtis Glencross were acquired and signed cheaply. His bold deal at the draft to swap picks and Alex Tanguay for Mike Cammalleri was probably the best available considering the circumstances at the time. It's probably no hyperbole to say these additions were three of the best players on the club this year (in their various capacities), both in terms of relative contributions AND value for cap dollars.

Of course, during the very same off-season, Sutter made many of his primary errors that culminated in the cap/injury boondoggle at the end of the season and probably in the loss of the division (and a date with the Blues in the first round). In the face of giant raises to Robyn Regehr, Miikka Kiprusoff, Dion Phaneuf and Daymond Langkow, the organization was faced with a budget crunch and the resultant need to "cut the fat" as efficiently and ruthlessly as possible. Sutter did manage to hide Eriksson and Nilson in convenient cap-sinks elsewhere, but those were two steps down a much longer road - a journey which he nonsensically decided to eshew.

Besides the guys mentioned, I identified at least 3 other low value contracts that were cluttering the clubs payroll heading into the season last summer: Wayne Primeau (1.4M), Rhett Warrener (2.25M) and Adrian Aucoin (4M). While Aucoin was arguable, there was no question that both Warrener and Primeau could be replaced internally by just about anyone: as it is, the two combined for 24 games played this past year and I can't see how the team was poorer for it (aside from he wasted cap space, of course). Some may argue that both spent generous amounts of time on LTIR and their cap hits were therefore moot, but there's more nuance to the CBA than that. In effect, both cap hits "counted" all season, but the club was able to exceed the cap in order to replace their spots on the roster while they were injured. The reason that is significant was summed up by Matt in his year end post a few weeks ago:

Quick primer if you need it: the amount of salary you can carry today and tomorrow is increased by how far below the cap you were yesterday. If through 3/4 of the season you are "on pace" to be $1M below the cap, you can increase your salary by $4M over the last 1/4 of the season.

Now consider that in a late season game, it was reported that Warren Peters was called up for a game instead of Dustin Boyd because of the difference in their salaries (which I believe, because there's no other 'good' reason). Boyd made $742k; Peters made $487k: a difference of $255k.

1/82nd of that difference is $3,000. The salary cap was $56.7M, and the Flames had to make a roster decision for a game based on three thousand dollars of cap space. That's outrageous.

There have been excellent posts on Sutter's moves at the deadline (specifically, the Jokinen trade) and what that meant for the club down the stretch. I maintain, however, that his primary cap mismanagement occured some 6 months earlier when he failed to excise the obviously useless Warrener and Primeau contracts.

Of course, his contributions to cap bloat didn't end there. As is his wont to do, Sutter felt compelled to sign one of his mysteriously coveted players to an indefensible contract - this time, it was Jim Vandermeer and his 2.3M dollars for 3 more seasons. A 29 year old journeyman defender with a "3rd pairing" ceiling doesn't command that kind of scratch in the NHL, because there's plenty of available replacements. Rookie Adam Pardy basically performed at the same level as Vandermeer this year, with the former making less than a quarter of the latter. It's like paying Benz prices for a Hyundai. It's an error Sutter has committed more than once with guys on the edges of the roster (Nilson, Primeau, Eriksson) and it's a habit that continues to cost the organization, both in terms of cap efficicency and development space for potentially superior assets.

Let's be clear that there were issues that cropped up with the team this year that can't reasonably be blamed on Sutter: Im thinking specifically of the steps back by the likes of Phaneuf, Iginla and Kiprusoff. I think  the contracts negotiated for these three players were defensible at the time and the less than value performances by these guys this year doesn't necessarily speak ill of Sutter. That's not to say he's in the clear, of course - his management of these dollars going forward, in light of each players developmet or decline, will be far more indicative of his abilities. For example, his repeated contention that Miikka Kiprusoff remains a top 5 goaltender in the league despite all the competing evidence to the contrary causes me significant anxiety because it suggests the Flames GM can't ably or rationally evaluate talent AND that he'll be ill-equipped to properly manage the situation going forward. But I suppose that remains to be seen.

Besides these points, there are a few other "your mileage may vary" criticisms of the big cheese: the Jokinen trade was ballsy and I think the sentiment (to firm up the Flames top 6 forwards) was the right one, but the execution left a lot to be desired. Not only did Sutter move a decent player on a very agreeable contract AND a first round draft pick, he acquired a player of dubious worth and at a dollar amount that's rather toxic considering the Flames budgetary position heading into next year. Then there's the whole Keenan hiring which has paid off is some ways and hamstrung the club in others (see below).

For many justifiable reasons, Darryl Sutter is seen as the organizations saviour and messiah: he delievered the club from dark times and placed it firmly back into contention. On the other hand, being handed a blank chank by the owners and carte blanche by Ken King hasn't resulted in the organization taking any real steps forward. The roster has gotten more and more expensive post 2004 and yet drifted slowly but inexorably away from the peak years of many of it's biggest difference makers.

At some point, I think the uneasy "Sutter equilibrium" will likely dissolve and the club will either markedly improve or fall into the league's basement in true Maple Leafian fashion. The swing will be determined by the cap, Sutter's management of his growing list of heavy conctracts and the development/acquisition of replacement parts for guys like Iginla and Kiprusoff down the road.