Before penning my season review, I plan to publish a number of "support posts" that will form the basis of my final analysis. This will be the first of that series.

After an underwhelming first round against the Hawks, a lot of people Flames land are wondering about Iginla's "not so dominant season"; an issue I had personally been kicking around for months before the post-season began. There's some speculation that an undisclosed injury was hampering Jarome's ability to perform this year, but I'm pretty skeptical of such explanation. Mainly because, as pointed out in my original study on the subject, Iginla was performing just fine against the leagues lesser lights. Dominating the Blues one night and then failing to appear against the Red Wings the next doesn't say "injury" to me. It just says "can't overcome tough competition", which is decidedly un-Iginla-like.

Now that the season is done, let's see if the trend we observed in February continued through to the end of the season. Except, instead of parsing the league into two groups ("strong" versus "weak") I decided to go with 3 different categories this time: strong-middling-weak (based on goal differential). 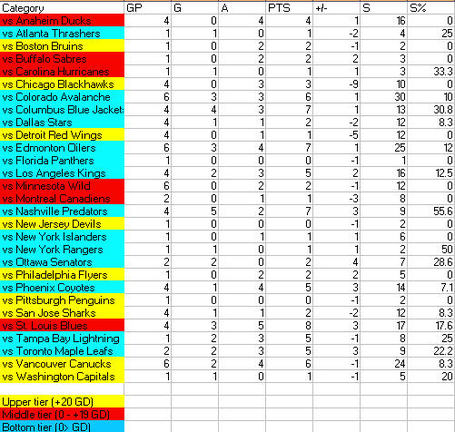 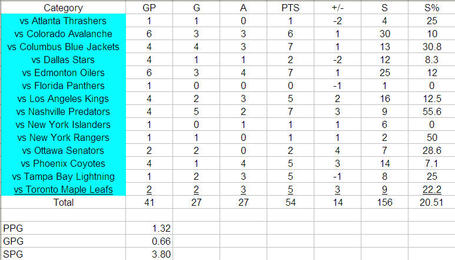 The categories were somewhat arbitrary, but I think fairly representative of the various levels of competition in the league. What you have for each is Iginla's point per game pace (PPG), his goal per game pace (GPG) and shot per game pace (SPG). Here's a summary of the results -

Of course, good teams are good teams for a reason so we can probably expect almost any players rates to take a hit relative to his output versus the bottom of the barrel. That said, Jarome scored on just 3 of the nine clubs that made the "top tier"cut and was a plus against just one of them. To my eye, those aren't even mediocre results considering Iginla's ice time at ES and on the PP (although the medicore goaltending surely didn't help the old plus/minus).

Just for comparative purposes, I took a look at Iginla's results from last season, with the same conditions applied:

As you can see, the differences aross the three conditions still exist, but are less pronounced. Iginla still kicked sand in the face of the NHL's nerds, of course, but did manage to put up pretty strong results against the other big boys as well. Sample size is a big problem with the top tier condition, obviously (one caused by the NHL's wonky schedule).

Now for the comparison between seasons

Not much difference. Iginla's PPG pace didn't really waiver, althoug he scored at a greater rate despite taking less shots this season.

This is where things start diverging, especially goal scoring.

It's too bad the data set from last season wasn't bigger, because it's somewhat hard to take much out of 13 games against just 4 different teams. Still, Iginla's various results from this year against strong competition are all inferior to last year, aside from shots-per-game (oddly).

Overall, I dont know if this makes a lie out of the chronic injury hypothesis, since Iginla was technically stronger across the board last season versus this one. That said, the delta in the bottom tier condition was the least pronounced (almost nill) as opposed to the other two. To me, that suggests other potential factors which I postulated previously:

1.) Strength of linemates - Last season, Iginla mostly played with Huselius, Langkow and Tanguay. This season, it was a grab bag of Cammalleri, Bertuzzi, Conroy, Lombardi, Glencross, Bourque and Jokinen at ES. That seems like a step down to me (either marginal or substantial, depending on the configuration).

2.) Strength of opposition - When Tanguay wasn't playing with Iggy last year, Keenan was sending him out against the big boys with Conroy and Nolan, leaving Iginla to take out what remained. There was no such sheltering for Jarome this season. Instead, Keenan had Langkow babysitting Bertuzzi and frequently fed the soft underbelly to the Moss/Glencross unit.

3.) Decline - Perhaps the worst potential cause is just straight up decline, which possesses and effects different players at different times and at different rates. Iginla won the NHL scoring race and Rocket Richard trophy several years ago while playing with Craig Conroy and Dean McAmmond for most of the season. He dominated the 03/04 play-offs, despite lackluster support and top notch competition.

Of course, none of this suggests that Iginla was a bad player this season. He just wasn't as good as we've come to expect. And with the team decidedly lacking in heavy hitters at ES going forward, Im hoping a return to form (whatever the cause of this years blip) is in the cards for next year. $7/year is an awful lot to pay for guy that only shows up against the bottom tier.