Yay Optimism - why the Flames may win

Share All sharing options for: Yay Optimism - why the Flames may win 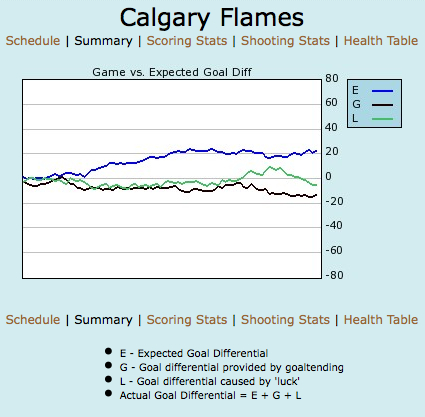 Obviously the litanny of projections in the depressing post below consider the Flames entire season results - which is fair enough, because that's the relevant sample.

I think a case can be made, however, that the final six weeks of Calgary's season wasn't at all representative of the team they actually are - prior to the swoon, which began on March 1 against the Tampa Bay Lightning, the Flames were cruising along with a 20+ GD and looked like one of the true contenders in the Western Conference.

Anyone who reads this space regularly knows the engine that drove the Flames success this season was their relatively strong ES play - the club regularly outshot and outscored other teams 5on5 thanks to 3 solid forward lines.

I'm not sure which Flame angered the hockey gods in March, however, because their percentages went right in the toilet. The first thing to go was goaltending. Although not exactly great all year, Miikka plunged into Raycroft territory after February, averaging a sub .900 ES SV% through March. Then the offense went south: not only did the Flames stop scoring at ES, the PP ended the season with an unprecedented 0-43 stretch. Look at that number again. Pretending the Jokinen/Furlatt thing didn't happen, the Flames had a PP SH% of 0 over the last 10 games (!). Injuries or no injuries, systemic deficiencies or not, that's some astonishingly bad luck.

Take a look at the chart above, pilfered from Hockey Numbers. The Flames ended the season with an expected goal differential of +21*. Their actual GD was a paltry +5. Why? Look no further than the goaltending and, especially, that plunging "luck" line on the graph. Now, whether the luck (sometimes called "error" in stats speak) was due to injury or bounces or bad feelings in the dressing room or fatigue or whatever, we all know 'round here that the percentages are fickle: sometimes they beat you up and sometimes they make you look like a superstar. Eventually, though, they regress to the mean.

Check out Calgary's numbers starting March 18. SV% of .906 (bolstered by MceLhinney's .935 in the final game against a resigned Oilers club) and a SH% of 6.3% at ES. That's a PDO of 96.9%, which is fairly awful. Keep in mind, this doesn't include the baffling PP streak. Again, according to Hockey Numbers, the Flames expected goals/hour on the man advantage this year was 7.16. Pretending Calgary got the full 2 minutes out of all those blown 43 PP opportunities (they didn't I'm sure, but work with me here) their expected output over that span would have been 43X2= 86/60 =1.43X7.16 = 10.26 goals. They got none. Surely this can't continue...

Perhaps most heartening for Flames fans is the corsi number in the above link. Tired, injury riddled and arguably playing some of their worst hockey of the season, the club managed a +175 figure over their final 13 games. No single regular skater for the Flames registered a negative corsi number in aggregate, even though the team sunk like the Titanic into cold water to end the season. This is encouraging, I think.

Of course, we don't know how long this cold streak is going to last. It's true that Calgary can't continue to shoot blanks indefinitely, but it's impossible to know if we'll see a regression before the season ends. What we do know is: a bunch of guys are coming back on Thursday and the Flames are a truly strong ES club.

If the hockey gods are through plucking the wings off the hapless Flames, Calgary could well win this series. The truth is, the two teams are probably not as far apart as they seem.

*(If I follow java geek's model, he multiplies SF by SQF for expected goals for, does the same for SA and SQA for goals against to find EGD. SQF and SQA are determined by where the shots were taken and how often they go in on average goaltending. Teams with high SQF numbers take better quality shots, ie; shots that go in more frequently, etc.)