In defense of Curtis McElhinney

Share All sharing options for: In defense of Curtis McElhinney 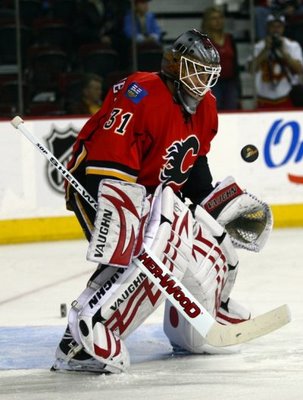 During my Score liveblog, I spent a lot of time warding off comments by people lining up to toss the rookie goaltender under the bus - "loser", "can't win", "Kipper wodda had that!" was the common refrain.

I take extreme issue with the emerging fan-sensus that McElhinney isn't an NHL caliber goaltender. I'm certainly not saying he is - the truth of the matter is we don't have any idea if he can indeed play at this level. For a couple of reasons:

Also known as "small sample size". McElhinney has started 5 whole games this season. FIVE. I personally don't feel comfortable evaluating an NHL hockey player (especially a goalie) after a single season, let alone the equivalent of a week and a half worth of work. In my opinion, a good number of starts to really get a feel for a 'tender's floor and ceiling is about 100. That's a hell of a lot more than five. The guy plays every other month for Chrissakes.

Because McElhinney hasn't won yet in his career, the emerging perception is that he'll never win - as in, there must be something about him causing the inevitable defeat. Meaning, while there isn't a lot of information, the data we do have all points in one direction, which is leading to the torches and pitchforks. But, like flipping a coin 5 times and getting all "heads", there simply isn't enough info to make any decisions here. Chance can have a significant effect on outcomes and perceptions when the sample size is so small; imagine, for instance, deciding what kind of goalie Kiprusoff was after his first 5 games of the year.

To illustrate, here are the stats from the each Calgary tender's last 4 starts. Guess who is who:

The difference being, this is almost the entire body of one guys work and just a  miniscule slice of the other's.

Or, in stats terms, "non-representative sample". Here are CuMac's 5 opponents this year:

- Of the five games, three (DET, COL, CAR) were on the second night of a b2b (anathema to the Flames this year for whatever reason). The Flames were visitiors in 4 of those contests as well (CBJ, DET, COL, CAR).

As you can see, McElhinney has been dealt shit cards so far: rare starts, bad circumstances and zero offensive support. Besides my stastistical objections, the fact that he's thrust into the most difficult position in sports at the highest level in the world once every 5 weeks or so is also a recipe for FAIL - any hockey player will tell you that practicing isn't enough to keep you game ready.

So give the kid a break. He may or may not be a viable NHL goalie and it'll take a lot more information before we can come to any sort of conclusion about him. The only things we know right now is: he was an AHL all-star at 24 years old and he's been screwed over in the NHL thus far.