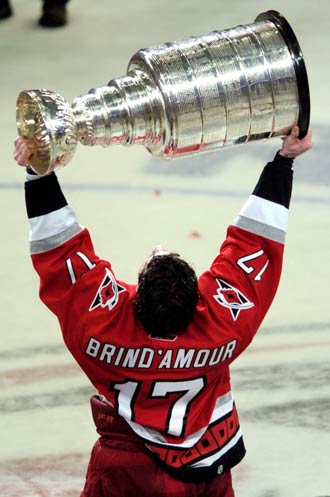 I wrote about the NYR a few weeks ago at my private site, noting the club has had some awful luck in terms of bounces, particularly SH%. Carolina is another team this year whose success rate is rather low for a club that routinely out-shoots the opposition at ES (+288 over the season).

Their problem seems to be two-fold:

1.) Lady luck is crapping on Eric Staal, who is +220 at ES despite playing the toughest match-ups, but has a lousy on ice SH% (7.1) for guy of his ability. Which leads us to the second issue...

2.) Lousy depth resulting in an antagonistic quality of chances at either end. Staal's regular line mates this year have been Tuomo Ruutu and Sergei Samsonov. He's also played with Whitney, Bayda and Eaves. And that's on the Canes #1 line against big guns. The depth below Staal features a doddering Brind'Amour and not much else. Then there's that blueline (Pitkanen, Corvo, Babchuck, Gleason...). Yikes.

Carolina's shot quality, like the Rangers, is low in the offensive zone and high in the defensive zone as a result. So while they generally out-shoot the bad guys, Hockey Numbers puts their expected ES GD at just +2. They're still underperforming that number (-7), but the difference isn't mind-blowing. Time to get Eric (and, uh...Joe Corvo) some help I think.

On the Flames side, the club is riding quite a high at the moment - they've scored 25 goals for in their last 5 games, despite missing a huge chunk of the regular roster. Everything Iggy and Cammalleri touch is going in the net and the Moss line continues to bitch slap whoever they play against, but the lack of a second line has to catch up to this team evenutally (plus the 4th line with Roy and rookies is no screaming hell either). I don't know a fall back down to Earth will happen tonight with the Canes various limitations, though we all know how terrible the Flames have been on the 2nd night of back-to-backs this year...

*Item! The Flames could tie a franchise record for number of consecutive road wins tonight (7).