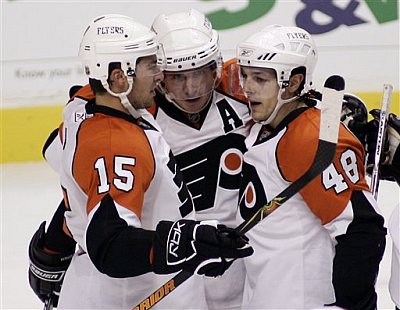 Don't blame yourself if you aren't too familiar with the Flyers - the Flames rarely ever see these guys. For whatever reason, only two games stand out in my head when I think of Calgary vs. Philadelphia:

1.) A back and forth contest in which Dean McAmmond scored in over time with a scorching, top-corner slapshot to give the underdog Flames the victory

2.) A hard fought, though not terribly offensive 0-0 game that went to a shoot-out, resulting in the first ever shut-out loss in NHL history (you can guess who now holds that dubious distinction)

If I concentrate, I can remember the first home game of the season last year, in which Anders Eriksson managed to hand the Flyers the win by giving the puck away to Daniel Briere at the Flames blueline (a sign of things to come) - but I had to mentally squint to bring that one into focus (seems to have been oppressed for some reason).

Anyways, here's a snapshot of the Flyers as they stand currently for those unaware:

- Strong top 6, supported by Mike Richards, Jeff Carter, Simon Gagne, Mike Knuble and, to a lesser extent, Scott Hartnell. Briere has been out most of the season due to injury/cap concerns.

- Keeping with the tradition of the broad steet bullies, Philly is the most penalized team in the league. They also, however, have the most SHG with 14, so maybe they're doing it on purpose.

Overall, I'd say the Flyers have a stronger top end, but the Flames (when healthy) have the superior depth. This would have been an interesting clash if both teams had full rosters, but as it stands this is likely to be a significant challenge for Calgary considering their current line-up:

You can bet at least one of the Flyers heavy hitters (Carter, Richards, Gagne) is going to see some significant time against one of the Flames 3 weaker lines (take your pick), especially with Philly being on home ice. As such, I think a tie this evening would be equivalent to a victory.