A farewell to Lombardi

Share All sharing options for: A farewell to Lombardi 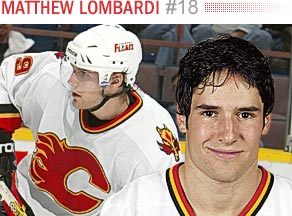 It's no secret that I've been a fan of Matthew Lombardi since he broke into the league in '03/04. A third round pick in 2002, Lombo was long-shot to make the club, even despite Calgary's total lack of forward depth up front. He impressed in training camp, however, and managed to stick with the team for a majority of the season.

Lombardi scored 16 goals and 29 points in his rookie campaign, including a memorable hat trick against the Chicago Blackhawks. For a fan-base that had suffered through years and years of Rico Fata-like busts, it was both refreshing and exciting to see a home grown prospect getting results at such a young age.

That year, the Flames went on their mythical play-off run, during which Lombardi was concussed by a Darien Hatcher elbow that saw him miss the rest of the post-season as well as almost the entire lock-out with post-concussive symptoms. Some would argue that the long lay-off hampered Lombardi's development somewhat, especially in light of his disappointing sophomore effort (6 goals, 20 assists in 55 games).

In 06/07, Lombardi started making significant strides as an NHLer. He managed to crack the 20 goal and 40 point barriers, despite spending most of the second half of the season as the club's 3rd line center behind Langkow and the newly re-acquired Craig Conroy. Prior to Conroy's return, Lombardi was scoring at a 60 point pace for the Flames, but his output promptly went in the toilet once he was sequestered in Calgary's bottom 6. His "demotion" wasn't necessarily unfruitful, however: Lombo spent a lot of time mentoring beneath Stephane Yelle in the defensive zone and the PK, adding new dimensions to his game that were previously under-developed or absent. He emerged as not only as a SH threat (5 SHG that season) but as a better all around player as well.

The next year, his 4th in the league, Lombardi's production dropped under Mike Keenan. I mused as to why this summer in this post:

Last season went poorly for Lombardi by the numbers. His counting stats were meh (14-22-36) and his advanced stats were bad-to-dreadful. He spent most of the season skating with rookies or sunset veterans at even-strength and 157 more minutes killing penalties than on the power-play. He also took more own-zone draws than either Conroy or Langkow.

Lombardi was basically stuck in the mud: he played a nebulous, poorly defined role with bad line mates in bad circumstances. He scored the most points of any "bottom 6" forward on the club, but was pretty much in the red by every measure by the end of the year.

The difficult internship he began under Playfair continued with Keenan: Lomardi suffered through some really awful circumstances last season, ones which surpressed his production and had the fanbase wondering if he'd ever take another step forward. While all of his stats were either bland or bad in an absolute sense, the truth of the matter is the speedster grossly outscored all of his regular line mates (Yelle, Primeau, Moss, Nystrom and Boyd) and was the only "bottom six" player on the club to garner more than 30 points that year.

This season, after a rough start and a long injury, Lombardi started to look like he was putting it all together. A strong two-way and PK presence, Lombardi's ESP/60, corsi, GFon and GAon rates all improved dramatically this season; in part due to the club's improvement in general and in part due to his improvement in surroundings (Cammalleri/Iginla and Moss/Glencross). His 30 points in 50 games projects to a 50 point full season; that doesn't sound terribly impressive, but keep in mind Lombardi averaged less than 2 minutes/game on the PP with the Flames this year. A few more minutes with the extra man and Lombardi is a 60 point player.

Lombo will never be a 30 goal player. He's unlikey to ever develop into a "#1" centerman. His game has some obvious strengths (blazing speed, excellent PKer) and some obvious deficiencies (hands and head can't keep up to his legs sometimes and he isn't very big), but I don't think there's any arguing that he's become a fairly useful player at this level. His last two difficult seasons prior to this one saw him become defensively responsible. He can play on both special teams and any line from 1-4, depending on what circumstances dictate. He'll never carry a terrible line, but he's never really "part of the problem" either. And, every so often, he'll kick in a highlight reel goal or two.

So long Lombo. You were often contentious and sometimes divisive subject for Flames fans, but I was always a fan. Good luck in Phoenix - if anything, I know the ladies here in Calgary are going to miss you.