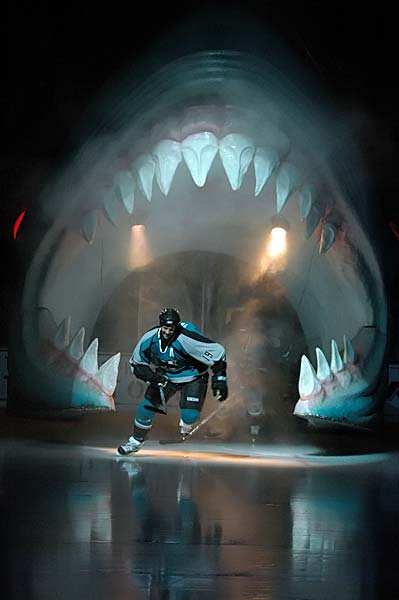 The Calgary Flames season has been punctuated by the San Jose Sharks thus far. In November, the Sharks pounded the Flames into a quivering mass, after which the coaching staff altered the clubs strategies and ultimately turned Calgary's season around. In January, the Flames became the first team to beat SJS in regulation in the Shark tank. It was, perhaps, one of the "biggest" victories for Calgary of year, if such a thing is possible in the middle of Jaunary.

And here we are again. Tonight, a Calgary win would mean a clinched play-off spot and another two points cushion above the ever-present Vancouver Canucks. The Sharks, on the other hand, don't have too much to play for outside of the Presidents Trophy.

San Jose, like Calgary, has stumbled recently, winning only 4 games (in regulation) in the last 15. Not that means they can be taken lightly - they're still the best team in the league with 109 points. Almost everything about the Sharks is elite: offense, defense, special teams. Their only weakness *might* be goaltending, something the Flames can relate to...

For Calgary's part, they played a complete game against what looks like a thoroughly bored and/or demoralized Wild club on Sunday. Everything looked to be back on track, although one wonders how much that had to do with the quality of the opponent. Tonight we'll see if Sunday's performance was a return to form vs. beating up on some guys were are basically mailing it in.

- Eric Furlatt will be officiating the game tonight. Sigh.

- Curtis Glencross was the first star Sunday, despite not recording any points. Good to see, too, because the hockey gods were clearly against him that night: besides the two cancelled goals, Glencross also set up Jarome Iginla at the side of the net for a relative tap-in...which the Captain swiftly shot 10 feet wide.

- Cammalleri was in the dog-house for whatever reason last game. I think he saw the ice maybe a handful of times in the third period. Nystrom, on the other hand, was rewarded for his relatively strong performance with a bunch of extra shifts.

- Dion Phaneuf saw third pairing match-ups...and still got scored on twice. It's just not working for him this year.

- The Lundmark/Langkow/Bertuzzi trio was surprisingly effective. I haven't looked at the shiift charts or anything, but I would guess they saw some of the softer underbelly. Which would make sense (to me anyways).

- We got the best and worst of Todd Bertuzzi against the Wild. The good was his work with the puck down low in the offensive zone most of the night. The bad was stuff like that mind-boggling stupid play near the end of the game where he decided to circle in front of his own net only to have the puck poked off his stick. Argh! To those who wonder: it's sh*t like that that keeps Bert in my bad books.

- According to Fear the Fin's gamepost, the Flames are the league leaders in terms of home penalty differential. Who knew?