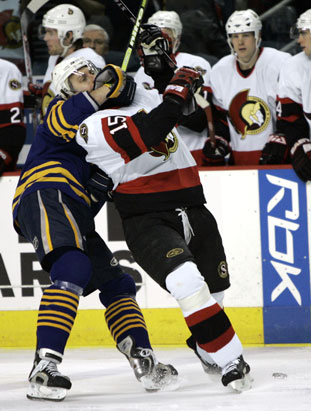 Everything has gone wrong for the Senators this year. Previously a powerhouse, the missteps of GM Bryan Murray have had a chilling effect on the club . The blueline, decimated by years of selling signed assets for short-term gain (not to mention just plain ol' mis-reading of talent *cough*Redden*cough*), is as thin as cheap gruel. The forward depth, beyond the big three, is almost as puddle deep as the back-end, and even those support players expected to take a step forward have underperformed (Kelly, Vermette). Oh and turns out entering the season with Gerber and Auld as your two goaltenders is *not* a good idea. Who knew? (Besides pundits, fans, children and apes conversant in sign language of course).

That cruel mistress *fortune* hasn't been kind to Ottawa either. Their ES SV% is mediocre and no regular skater on the team has had a SH% above 10% while they've been on the ice. When your club boasts Heatley, Spezza and Alfredsson on a single line, that's pretty unbelievable.

As you can see by the team corsi rate (-78) it's not like the Sens are a capable club being jobbed by the bounces. They clearly aren't very good. That said, they probably aren't as bad as they've seemed thus far. Get a decent goalie and/or some bounces up front and they're probably at least in the play-off hunt. I more than expect them to "rebound" next season, at least back up into the East's top 8. Assuming Murray doesn't blow it up this summer, of course.

This is a winnable game for the Calgary Flames. Or it would be, if the team wasn't totally riddled with injuries. Sitting out tonight will be Daymond Langkow, Todd Bertuzzi, Rene Bourque, Mark Giordano, Brandon Prust and Wayne Primeau. Andre Roy will be back in the line-up, but that's hardly anything worth celebrating. Here are the potential forward units based on who's left:

- This could be the last game in a Flames uniform for someone tonight. Probably not, but, just in case...any guesses?

- Sutter's hand may be forced by all these injuries. I can't imagine him not making a move by tomorrow, be it on the waiver wire (Morrison, Satan) or elsewhere. The Flames can't continue to play with a first line, a third line and two fourth lines for very long.

- $8M man Jason Spezza seems to be extremely unpopular in Ottawa these days. I can understand the frustration (guy seems to float around and is prone to ugly give-aways), but check out his percentages from the link above: 0.895 SV% and 8.2% SH%. That's an awful PDO (97.7) meaning Spezza has been pretty bloody unlucky this year at ES. He's also one of the few Sens in the black in terms of corsi, so the puck is moving the right way with him on the ice. Keep in mind that PDO's tend to regress towards the mean (100) over the long term and forwards have almost no effect on the SV% behind them. What this means is: if OTT deals Spezza in the off-season, they'll miss out on his bounce back next year. H/T PPP for the link.