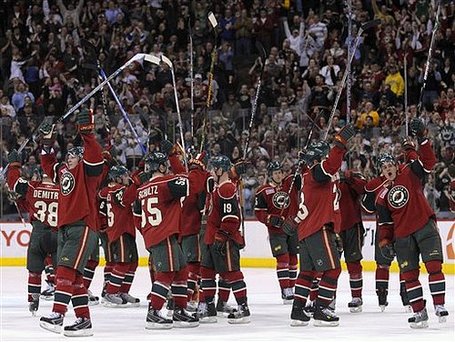 The train has certainly come derailed a bit recently and the club seemingly has a long way to go to get things back on track. The PK is giving up goals and chances, the power play is a study in futility, the big guns are firing blanks and the goaltending is mediocre at best. As such, there isn't one or two areas of concern; it's pretty much all bad right now. Even the Flames ES play, which was the engine driving their success for most of the season, has been suspect for the last 4 games. The possession stats are bad, the percentages are bad. This is not the way to win a division or enter the play-offs.

There's time to turn things around - not a lot, mind you, so tonight would be a good place to start. Calgary has had the Wild's number for years and, while Minny is still technically battling for a play-off spot, they are club ripe for the picking: their best forward (Koivu) and their best defensemen (Burns) are out indefinitely and the Wild have 3 teams they need to leap frog in order to make the dance. Things are looking pretty grim for Risers boys and the Flames have the duel opportunity to turn their fortunes around and put a stake through a divisional rivals heart this evening. Here's hoping they take advantage.

- David Van Der Gulik has been re-assigned to Quad Cities with the return of Todd Bertuzzi. I don't understand the decision to dress Pardy instead of Peters up front though - Pardy isn't a forward. Play him on the blueline or not at all.

- Jarome Iginla has one goal in his last 8 games. He took 7 shots at the net last game, and 6 of them went wide. He frequently skates directly into coverage and then loses the puck during the ensuing battle. He can't seem to get much beyond the perimeter in the offensive zone. "Jarmoe" has reared his ugly head Im afraid. Again.

- The third line is still getting the job done in terms of possession, which may be the lone (admittedly dim) bright spot right now. I don't think it's a stretch to say that Glencross/Moss/Conroy have been one of the main reasons the Flames are 3rd in the Conference at this point.

- Is anyone having 2nd thoughts about the Jokinen trade yet? Remember, the Flames lost Lombo AND a first rounder...

Now, Im certainly not saying that Jokinen is at fault or the loss of Lombo is the cause of the recent slide. But, the fact that Calgary's results haven't improved at all after giving up a significant package for the big guy makes one wonder if it was all worth it. Of course, we won't really know anything until Jokinen has played out his time here.