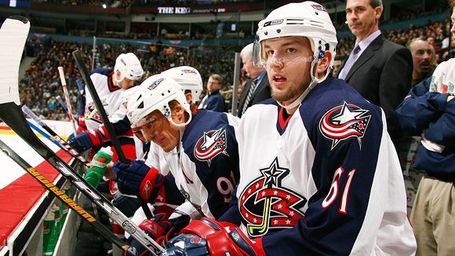 I'm sure I don't have to alert anyone to the fact that this is a potential (probable) first round match-up this eveing. I also don't have to mention that Calgary has been dreadful on the 2nd night of back-to-backs this year as well. I haven't looked it up or anything, but Im guessing the Flames have the worst record in the league in this regard. So yeah, not looking good since the team hasn't exactly been playing well for awhile anyways.

Columbus is an underrated squad for two main reasons this year:

1.) They had readful goaltending for a long time to start the year. Like, league worst goaltending, and it hobbled their record. The revelation that is Steve Mason did a lot to salvage their year.

2.) Their woeful PP distorts their GF and makes them seem less potent that they atually are. For whatever reason, the pucks aren't going for Columbus with the man advantage, even though they are a more than capable ES club. That apparent paradox feels familiar to Flames fans recently, Im sure.

The Blue Jackets added Jason Williams and Antoine Vermette this season (two talented players whose stocks were low for various reasons) for chump change and they have Brassard, Voracek and Filatov auditioning or waiting in the wings. They also have an excellent coach. It's not a club we can take lightly anymore.

- Bert is apparently healthy and back in the line-up tonight. Woop-a-di-doo! Im sure we'll see Keenan's dream line of Jokinen/Iginla/Bert take more than a dew shifts. Frankly, I dont like that trio especially if Iginla is facing any kind of tough match-up, but we'll see how it goes.

- Im sure we'll see Kipper in net again too. Now that the Canucks are 3 points back with a game in hand, points are suddenly very important again. Poor Curtis.

- Let's see if the Flames can do something about their woeful PP this evening. It basically lost them the game last night.

- Boyd gets the bump with Bert back (say that 4 tims fast) and will probably play o the 4th line all night. I would expect VDG to be the odd man out, although it may be Peters as well.