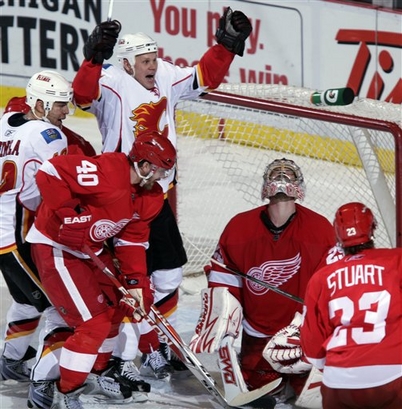 Enemy Perspective: Winging it in Motown

We all remember the last meeting I trust? Fiasco first period, glorious third, etc? Well, since then Detroit has won 4 straight (with Osgood in net, no less) and are suddenly the best team in the NHL. Again.

Calgary, on the other hand, has been up and down. The "momentum" of the emotional SO win over the mighty Red Wings translated to an ugly 8-6 loss to the Maple Leafs a couple nights later. The Flames have since come home, beaten Dallas and then surrenedered their first lead (heading into the 3rd period) to the lowly St. Louis Blues. It' been a mixed bag in Flames town for weeks and there's a lot of folks anxiously rubbing their hands together now that Vancouver's grille is in the rear-view mirror and the post-season is a stones throw away.

My thoughts? The Flame are suffering through a really ugly patch of goaltending more than anything. Every weakness seems inflated when 11% of the shots being taken at ES are going in your net. And, as hard as I've been on Kipper this year, I don't think there's any way he'll continue to stink this badly - we'll just have to hope he gets back on the horse before the Canucks pass on the left*.

* (This evening would be a great time to stop stinking)

- VDG has been called up and will replace the ailing Andre Roy. Good news. Unfortunately that means Adam Pardy will be a healthy scratch. Bad news...sorta.

- Todd Bertuzzi is apparently practicing already - and Keenan has him skating with (you guessed it!) Jokinen and Iginla. Gag me with a spoon.

- Thomas Holmstrom WON'T be dressed for the Red Wings tonight. Thank god for that.

- A lot was made of the 28 shot first period Detroit mustered in the last game, but many of those shots were had during a seemingly endless 5on3 opportunity initiated by that ridiculous 5 minute major call on Dion Phaneuf. The Flames actually ended up outshooting Detroit at ES by the end: looks like the Red Wings played to the score and it burned them.