Share All sharing options for: Flames/Lightning Postgame - Celebrating the Captain 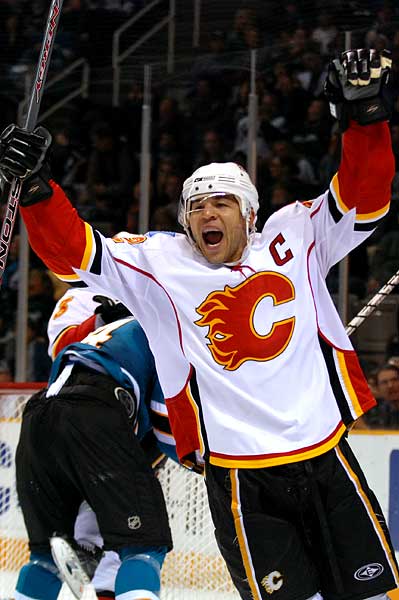 Last night's loss is irrelevant in the grand scheme of things, especially compared to the feat(s) managed by the Jarome Iginla. The captain matched a career high 5 points, scored his 400th career goal and passed Theoren Fleury's franchise best 830 points.

Iginla isn't just the highest scorer in the history of the Calgary Flames: he is it's greatest all around player. On the ice, Iginla has been the face of the club for the better part of a decade. His mix of strength, speed, intelligence and competitive spirit has driven him year after to year to new heights, to ceaselessly improve, to constantly show he deserves the C on his chest and the accolades he receives.

Of course, that's only where it begins. Iginla is also the consummate professional off the ice. Gregarious and affable, Calgary is rife with stories of fans that have run into Iginla and come away impressed with his approachability, modesty and generosity. In a time when pro athletes frequently succumb to the pressures and seductions of celebrity and hubris, Iginla has always remained seemingly grounded despite his status as local hero and NHL superstar.

Congratulations Jarome. And thank you.