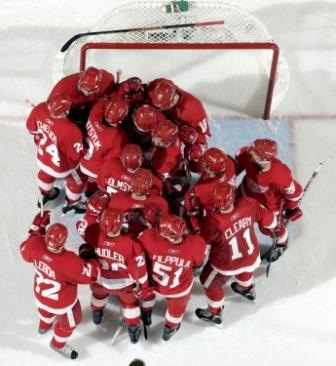 Enemy Perspective: Winging it in Motown

As the Calgary Flames stumble towards the finish line of this road trip, ragged, hurt and despondent, their path unfortunately crosses with another juggernaut: the Detroit Red Wings.

Flames fans and players have a lot of reasons to fear Detroit: Motown crushed Calgary under heel in the '07 play-offs and have gone about humiliating the Flames at nearly every occasion ever since. The first two clashes of the current season have ended in defeats for Calgary and there's little reason to predict a different result tonight, given the way the club has played over the last 3 games.

Still, there are some indications that Detroit is no longer invincible - a couple of giant recent losses to CBJ and NSH and an injury to Marian Hossa makes them seem thoroughly vinsible in fact.

The White Elephant in the red, spoked wheel jersey is Chris Osgood, though.

He hasn't been merely average - he's been terrible. Worse-than-Racroft-bad. Awful. His SV% of 0.878 so far is good for 43rd best in the league. Out of 43. His GAA of 3.30 is also terrible, particularly considering the team he plays behind. His record is an abject lesson as to why "wins" are not a credible goalie stat: 20-6-7. Viewed in the context of his other numbers, those 20 wins are a compliment to the skaters in front of him and a further indictment of his performance. In the parlance of hockey punditry - the record flatters him. All that said, Im guessing the much more capable Ty Conklin will be in net against the Flames this evening.

In many ways, I consider the Detroit Red Wings the exemplar franchise of the NHL - in terms of coaching, scouting, player procurement, player development and team building they are as good or better than their competitors. I've recently come around to accept that their view of spending minimal dollars on goaltending as the right move (as you can see, having a good team of skaters can white-wash problems in net), but I think we're witnessing the major risk engendered by that strategy this year with Osgood - when a cheap, average goalie underperforms, he becomes a cheap, terrible goalie. Of course, spending minimal dollars on a starter means you can also afford to give your back-up a few starts - which they have - to see if he can carry the mail if the incumbent can't - which Conklin has (.916 SV%).

So, Osgood stinks and Hossa's hurt. Besides that, the Red Wings have the aforementioned Conklin, Henrik Zetterberg, Pavel Datsyuk, Johan Franzen, Niklas Lidstrom, Brian Rafalski and Niklas Kronwall. They are first in the league in terms of GF (241) by a healthy margin and their PP is tops in the NHL (27%) as well. So, yeah, great team for the struggling Mikka Kiprusoff and PK to face, hey?

On the Flame side, I dont expect anything to be much different this evening. The match-ups are going to be a bitch for Keenan to manage even with Langkow back in the fold: when you're forced to give a significant amount of ES time to a line boasting both Dustin Boyd and Jamie Lundmark on the road, you're going to be in touble. Especially when the opposition coach can target them with Datsyuk/Zetterberg or Franzen. Also - it's not like the Iggy line has been beating anyone's heads in recently. If Babcock is satsified to go power v power, Calgary is still in trouble as far as I'm concerned. Oh well. At least David Moss is back, right?