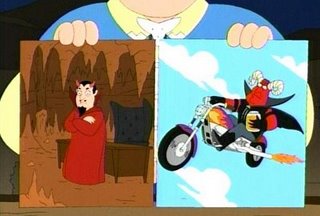 Enemy Perspective: In Lou We Trust

It's been a couple of tough ass-kickings for the Flames and things don't get any easier tonight. The Devils are an excellent team - for my money they've been the best club in the EC for awhile and they just got Martin Brodeur back.

Driving the success is the coaching of Brent Sutter and the emergence of Zach Parise. From what I can tell, Parise has taken a legitimate leap forward this season (unlike, say, David Krejci who is riding the percentages train).

Parise's 280 shots on goal are third in the league behind Ovechkin and Eric Staal. He plays quality competition, has the best corsi rating on his team (+15.5/60) and is scoring at a 3.11/60 clip at even strength. These are Jarome Iginla type numbers folks - when Jarome Iginla was dominant. Guy went from Devil to Super Devil in a single summer and he's only 24 years old.

Besides Parise, NJ has some nice depth up front in Elias (who has been quality for years when he's managed to stay healthy), Zajac (the man who fooled the Flames scouts into thinking Kris Chucko was worth a damn in Salmon Arm), Brian Gionta, Jamie Langenbrunner, Dainius Zubrus and John Madden. Rolston and Shanahan were added this year for good measure. In fact, and I don't know why this didn't occur to me before today, this is scary deep collection of forwards from top to bottom. New Jersey's blueline is fairly underwhelming (although Martin is grossly underrated), but it may not even matter that much given the kind of talent the Devils boast elsewhere in the line-up.

On the Flames front, it looks like Moss and Langkow will be returning tonight, which is excellent news considering the stiff competition. David Van Der Gulik and Brett Sutter have returned to th QC Flames with Warren Peters remaining to center the 4th line. I hope - and I dont think Im alone in this - that DVG will get another chance to play for the big team in the near future. He never looked out of place in the NHL and put up some really nice looking underlying numbers in a tough situation. For what it's worth, I think VDG has arrived as a viable replacement level player.

Question remains - what do the lines look like with Moss and Langkow returning? I would be loathe to break up the highly effective Conroy/Glencross/Moss trio and Keenan is probably going to roll with Cammalleri/Jokinen/Iginla again, leaving us with:

We're still a few steps from ideal here and I hope we aren't rushing Langkow back prematurely in response to the last two face-plants in CAR and ATL. Still, nice to have him and Moss in the line-up.

Im still not too hopeful about this evening, although the Vancouver loss to LAK last night granted the Flames a bit of breathing room atop the division. At this point, it's more about riding out the remainder of the road trip with some players and pride intact than going for broke evey night. If Calgary can emerge from this excursion with a .500 record and relatively healthy line-up, I'll be pretty damn happy about it.