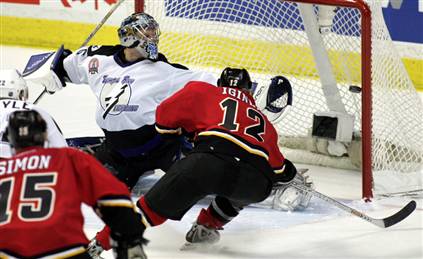 Calgary and Tampa Bay are two clubs that have headed in opposite directions since they met in the finals back in '04. Calgary has made the play-offs each season and is currently 10 points up on Vancouver for the NW division crown. Tampa, on the other hand, has rapidly sunk to the bottom of the NHL pile. They were the worst team in the league last season and, after much tinkering and trifling by their clueless new ownership, they are tied for second last currently.

Aside from a couple of notable assets (Lecavalier, St. Louis, Smith, Stamkos and Malone) the Lightning are woeful from top to bottom. They have one of the thinnest bluelines in the league and are a gross mish-mash of forwards up front, ranging from the doddering (Roberts, Recchi) to the young and ill-prepared (Stamkos, Downie). The roster is the very picture of an inexperienced management more or less randomly grabbing players on whim and rumor. "Dogs Breakfast" is what comes to mind when I glance over their line-up.

The Lightning are 42 goals underwater in terms of GD. They give up a lot of shots and goals against and have worse than average special teams (21st and 18th for the PP and PK respectively). They've also taken the most bench minors in the league (not that that's overly relevant, it just struck me as weird).

To add insult to injury, both Mike Smith and Olaf Kolzig are down for the count, meaning the club has had to rely on Kari Ramo and Mike McKenna recently - both of whom have struggled in the AHL this season (let alone the NHL).

Lecavalier and St. Louis are great players, but, let's face it...the Flames probably should win this one in a walk. Of course, as you as you start thinking that a win is guaranteed you end up getting blown out..

- Iginla is one point away from tying Theoren Fleury's franchise mark. Tonight -at home - would be a great time to match or surpass the record.

- Brandon Prust is out with a probable concussion after the Boogaard hit from last game. That means David Van Der Gulik will be sticking around for awhile after all.

- Daymond Langkow's hand is still bothering him and he won't be making the road trip. That's not good news.