Now that we're a third of the way through the season and the SC numbers are starting to pile up, we can start applying some minor tweaks to make them more meaningful. Primary among which is to look at rates or the efficiency with which players are generating (or preventing) scoring chances while they're on the ice. We know, for instance, that Curtis Glencross leads the team in SC differential so far, but that doesn't take into account his ice time. Like even strength points per 60 (ESP/60), looking at each players rates will gives a better idea what's happening while he's on the ice. First, let's look at each guys totals, differentials, ice-time and corresponoding /60 rates.

Here we have: chances for (EV+), chances against (EV -), gross differential (EV diff), chance for/against ratio (EV Ratio), even strength ice-time (EV Ice) and the resultant per 60 rates. The list is sorted by chance differential/60 minutes of ice (final column).

- Curtis Glencross is a ridiculously good by this measure. No one even touches his +6.68/60 rate on the club. He leads the team at both preventing and generating scoring chances so far.

- Jokinen rate of -4.7 chances/60 is positively ghastly. Even McGrattan, Sjostorm and Prust aren't liabilities to the same extent.

- Keep in mind circumstances when evaluating these stats. Pardy and Kronwall are highly sheltered, for instance. Glencross is kicking butt, but he also sees a lot of third liners and more offensive zone draws than, say, Bourque or Langkow.

- Boyd's corsi number isn't impressive this year, but he seems to be outperforming it thus far. Although he tends to spend more time in the defensive zone, he manages to be pretty efficient in terms of generating scoring chances. Although, one wonders how much that first 10 games stretch where he was playing with Glencross and Conroy is skewing things.

Chances for - Comparing the Forwards

I thought it might be interesting to look at scoring chance rate stat that best matches each position's (theoretical) responsibility. For example, forwards are primarily concerned with generating scoring chances. On the other hand, defenders are primarily concerned with preventing them. As such, let's see who has the best rates at either end of the spectrum. First, the forwards: 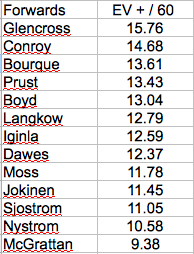 Keep in mind, this is the rate at which each player generates chances while he's on the ice at ES (X/60 minutes). Items of interest:

- Jarome Iginla is more than 1 chance/60 better than Jokinen despite spending most of his time with the big fin this year. One wonders what the difference would be if the two were separated. On that note, Jokinen only hovers above grinders and goons in terms of SC efficiency. And while he sees much tougher opponents, he also plays with guys like Iginla, Dawes etc.

- Moss is underperforming by this measure relative to expectations I'd say. Part of that was starting the year on the wing with Jarome and Jokinen and part of that was his post-injury malaise. Hopefully he can get back on the horse.

- Prust's rate is surprisingly high, but sample size is an issue. He's only played 143 ES minutes this year.

Chances Against - Comparing the Defensemen

This is something of an extension of my summer project to determine true defensive effects of individual blueliners. During the off-season, I calculated "shots at the net / 60" with each Flame defender on the ice - the theory being that good defenders would allow less shots at their net than poor ones. In that study, I found that Dion Phaneuf was the worst Flames defender last season with a 51.2 shots/60 rate being well above every other rear guard else on the team.

This follows along the same lines, except for scoring chances (those being the more dangerous shots):

Keep in mind, this is scoring chances against per 60 minutes of even strength ice. Items of interest:

- Yup, Cory Sarich stunk when he was in the line-up. Sometimes numbers and subjective evaluations do line-up perfectly. It remains to be determined whether his struggles were a result of playing through injury or not.

- Phanuef and Regehr have been much higher event than Giordano and Bouwmeester thus far. To the tune of almost 3 chances/60. That's no doubt partially from spending more time behind Iginla and Jokinen against other teams top players (although the difference between quality of competition and zone starts between the two pairings is fairly marginal). Can we conclude that the difference is a mixture of circumstances and Bouwmeester (and Gio!) being just that good?

That's it for now. This stuff will be interesting to pursue as the season matures no doubt.