It's about that time again to sort through the scoring chance totals and see who's been driving the bus (and who should be thrown under it). Through the first couple of 10 game segments, the Flames were a fairly middling team by this measure - they gave about as good as they got, although many of the money guys were well under water (which is a sub-optimal way to spend a bulk of your payroll to be sure). High shooting percentages in October and out-of-this-world goaltending since are therefore probably the reasons Calgary is challenging for the division crown at the moment.

Anyways, to the tables! 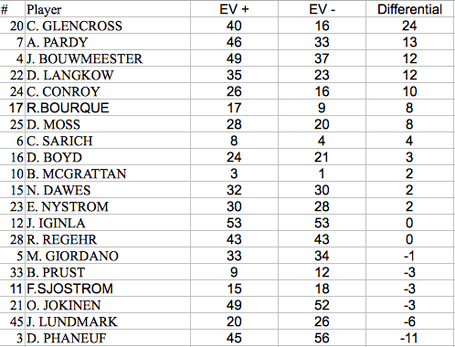 Games 21-30 encompassed one of the club's best stretches of the season - namely, the 6 game road trip. As a result, a majority of the team was in the black by this measure (or at least treaded water). Iginla and Jokinen didn't exactly set the world ablaze, but there was at least improvement over their previous 20 games. Of course, Curtis Glencross continues to pummel other third liners, while Langkow, Bourque and Conroy continue their stellar play as well.

Overall, the Flames garnered about 53% of the ES scoring chances recorded over this period - a very healthy ratio.

Other items of interest:

- If you visit some Flames messageboards, you'll notice a small contingent of fans want to recall Jamie Lundmark and put him on the first line because, well...Iginla was scoring when Lundmark was up the last time. Unfortunately, correlation does not always equal causation. Despite playing with Jokinen and Iginla during their strongest stretch of the season, Lundmark was still under water. In addition, he was the first guy to sit on the bench when the game was within a goal or two in the third period either way. I personally like Lundmark and think he could probably replace a guy like Sjostrom or Prust on the roster tomorrow, but the fact of the matter is he's no solution for the first line LW conundrum.

- Phaneuf with his worst relative 10 game stretch thus far. Some of that has to do with Sarich going down and Regehr and Dion getting a lot of the tough match-ups many nights, but it's still not the best sign for a guy of his pay-scale and established defensive issues. Keep in mind, this sample does not include the recent Minnesota debacle where Dion was something of a disaster (-3, including that final, terrible shift). I was somewhat encouraged by Dion's humble steps forward initially, but it looks like he's taken a few steps back recently.

- Olli Jokinen still one of the worst players on the team at ES by this metric. That's the bad news. If you're a silver lining type, he at least wasn't completely terrible which is something of an improvement.

- Nystrom's numbers improved somewhat. A lot of that has to do with playing mostly with Bourque and Conroy rather than Sjostrom and Prust/McGrattan no doubt.

- How does Bouwmeester do it?

Of course, this is all just a third of the season that has passed thus far. Here are the total as they stand today (minus the untelevised Blues game and the last two most recent contests, of course):

Looking at the Flames payroll, one could reasonably expect this list to be inverted. Through the first 30 games, though, the Flames have $26.37 million in capspace (Iginla, Jokinen, Sarich, Regehr, Phaneuf) six feet under ground by this measure (to the tune of a cumulative -115 rating). Many of the supporting players are getting the job done, but a good portion of the top end of the roster has spent the time getting out-chanced through a third of the year so far. To be fair, all of them have had to deal with pretty tough assignments in terms of own-zone draws and top-notch competition but that is, as the saying goes, why they get the big bucks. If the players you're paying elite salaries to can't at least hold other elite players to even in terms of getting the puck into scoring areas, then it stands to reason that you're using your cap space inefficiently (to be perfectly polite). Whether you want to put the blame on Jokinen himself, the lack of a legit winger for the top unit, a lack of "chemistry" between a couple of shooters in Jarome and Olli or too much money invested in the back-end (or a combination thereof) I think it's becoming pretty clear that the Flames will need to do something to get their top end guys out of the possession/scoring chance basement.

Kipper's heroics have covered a lot of these warts thus far and it's certainly helped having guys like Bourque and Glencross knocking it out of the park, but if the team wants to continue to challenge for the division and third in the conference, it simply can't have some $18M in "offense-first" players (Jokinen, Iginla, Phaneuf) bringing up the rear. Especially given the way the club's special teams have fallen on hard times recently.