Frequent readers will sometimes notice some of us around here referring to corsi or possession/out-shooting as it relates to "zone start" which is fancy name for where on the ice a player starts his shift. RO has begun to include zone start information for each contest in his post-game wrap-ups, while Desjardins includes face-off info (including a handy offensive zone F/O ratio %) at behind the net.

But, really, what is that information worth? Sometimes a lost face-off will result in a goal from the point, but that's exceedingly rare, right? And over the course of the season, don't offensive/defensive zone face-offs eventually cancel out?

Let's tackle the second question first: different players are placed in different circumstances by coaches, depending on match-ups, abilities, needs of the team, etc. In Calgary, for instance, a lot of the big money and more defensively dependable guys have a low offensive-to-defensive zone face-off ratio because Sutter considers them the strongest players on the club: Iginla, Lankgow, Bourque, Bouwmeester, Phaneuf and Regehr are below the 50% mark in terms of zone start currently Over the course of a season, that can mean literally dozens more face-offs in the defensive end. Jay Boumeester, for example, saw 181 more defensive zone draws as a Panther last year.

To give an idea of what that can do to a player's underlying stats (and, further, to his counting stats), consider that Desjardins has calculated the effect of losing a defensive zone face-off:

After you lose a faceoff in the neutral zone, you have time to set up defensively and you don’t give up a particularly large number of good scoring opportunities. However, when you lose a faceoff in your own end, opponent shots on goal go up so quickly that it’s as though you gave the other team a 10-15 second power-play. For several seconds, the rate of shots allowed is as high as it is on a 5-on-3. The prospect of this level of defensive disadvantage, particularly late in a one-goal game, must give coaches nightmares.

The rate of shots referred to here is an acceleration of 25 to approximately 120 shots per 60 minutes between 0 to 5 seconds after losing the draw (see graph at link). Conversely, attackers who take a lot more draws in the offensive end of the ice benefit from this advantage whenever they win the draw. As a result over a big enough sample of games, some guys have shinier corsi rates (and, often by extension, plus/minutes and scoring rates) than others, simply by virtue of how they're used by the coach. Tyler Dellow put together this graph awhile back which nicely illustrates the relationship between corsi and defensive zone starts.

Other work previously done by Vic and JLikens postulates a "correction factor" of +/- 0.8 per zone start differential, meaning: each additional offensive zone start is worth about +0.8 to corsi, while the opposite is true of each defensive zone start. As mentioned, some players spend a lot more time starting in the defensive zone (and vice versa), so the effect could be a fairly dramatic one over a long enough time line.

With that in mind, I decided to look at the Flames corrected corsi rates. I used the data from behind the net and put it through a slightly simpler process described by JLikens in the second link above. Here are the results: 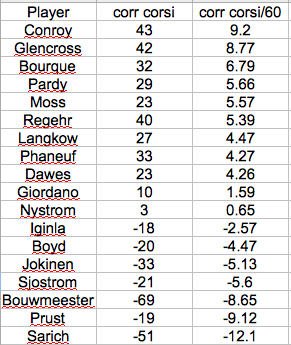 The columns are raw corsi and /60 corsi rates. I excluded guys like Kronwall, Johnson and McGrattan who haven't really played enough to bother with.

The results are fairly interesting. Langkow, who is actually underwater by the standard corsi measure, gets into the black by this process owing to his high degree of zone starts. Bourque's stats also get a boost, moving him well up the list. On the other hand, guys like Sjostrom, Prust, Boyd and Sarich fall back.

Keep in mind, of course, that this is simply one layer of context added to the possession/out-shooting picture. Quality of competition and ability of line mates would no doubt also have sizable effects on corsi rates. For example, I imagine if Jarome had spent the year playing against nobodies with Langkow and Bourque that his corsi rate would be vastly improved - even if his zone start differential remained the same.