Scott was good enough to post the Flames scoring chance count through games 11-20 (minus the untelevised Blues game of course) below. Here I've added the differentials for the second set as well as whole data set thus far. 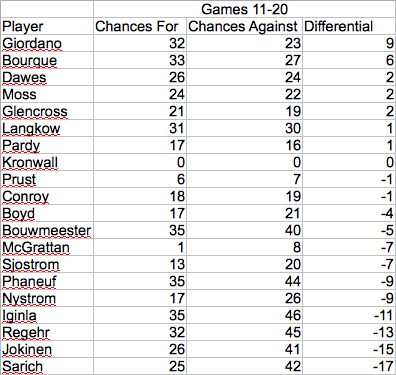 Conroy and Boyd came back down to earth in this segment, while Mark Giordano climbed back up top from the third pairing. Iginla and Jokinen were marginally better in this series, although it still sucks to see the two of them at the bottom of the forward barrel.Of note is the fact that Langkow et al are still on the plus side of things, despite some tough match-ups and lots of own zone draws. One wonders how well they'd do if they weren't having to take on the heavy lifting so often.

On the bad side of things, Cory Sarich has absolutely had his ass handed to him by this measure thus far. It's notable that his regular partner, Jay Bouwmeester, was somehow 12 chances better through this 9 game sample. Hmmmm...

And now, for the whole dataset:

Glencross' big first 10 and passable second 10 has him in the lead while Mr. Sex Panther brings up the rear. Keep in mind, of course, this is all even strength information so excludes all the chances Iginla and Jokinen would be getting on the PP.

- Rene Bourque has been amazing thus far. Here's hoping he's not out for the long-term. Honestly, he's been the Flames best all-around forward over the first quarter.

- I personally like the work of Nigel Dawes. Although he skates with some good players in Langkow and Bourque, I don't think he's merely been a passenger on that line. He was acquired as a "sniper", but his vision and ability to find open teammates in the offensive zone has been a boon to the squad. He isn't a defensive liability either.