Share All sharing options for: Minor happenings: Moose 5 Heat 4 (SO) 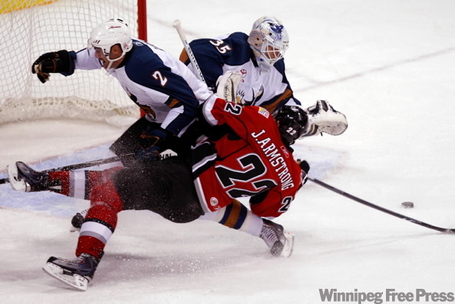 I had an opportunity, for what will very likely be the only time this year, to watch the Flames' minor-leaguers in action last night at the MTS Centre. Here are a few notes from an odd affair:

Roster-wise Matt Keetley started in net, and through two periods, the regular D pairs were Pelech-Negrin, Seabrook-Baldwin, and Cole-Aulie. Playfair had the blender out for the forwards. I'm not sure why no Brett Palin, and Carsen Germyn was also scratched. Injured, possibly?

As for the game, if anyone wanted to know why Matt Keetley has had trouble getting over the hump, last night's game had many of the answers in microcosm. He made quite a few good saves, but mixed that work with shaky rebound control, some positioning issues, and had a couple of pucks go right through him. His good play was the reason the game was tied at 1 after two periods, and the iffy stuff was a big part of the reason the Heat found themselves down 4-1 with just under 9 minutes to go. The Heat put Leland Irving in for the OT and shoot-out. It looked like a tactical move by Playfair rather than an injury to Keetley forcing things.

Matt Pelech had a very difficult game,  -2 with some poor reads, and a reckless foray up ice lead to a lengthy (read:cricket match-lengthy) three on one that was finished by a very patient Sergei Shirokov's deke and goal. That appeared to end Pelech's night, because I don't remember seeing him in the last 11:54 of regulation or OT. I don't think he was hurt, either, if you follow. Keith Aulie joined him as a spectator in the second half of the third, so if two of your touted prospects are watching Gord Baldwin and Brad Cole, you pretty much know what kind of night it was through the first 50-ish minutes.

The Heat defence in general had some issues with the Moose forecheck on the way to giving up 43 shots in actual play, and Keith Seabrook made a D to D power play pass so terrible to set up the 4-1 goal for the Moose that it should read this way:

Keetley didn't aid matters by letting the ensuing Mario Bliznak shot slide through the 5 hole, but it's one he shouldn't have faced. Seabrook wasn't out of place otherwise, settling down in the last 9 minutes, along with the other 3 defencemen that Playfair used, as the Heat mounted a PP fueled comeback.

The forwards were lead by the Lundmark-Jaffray pairing. Jamie Lundmark truly is, in baseball terms, a AAAA player. He's never quite good enough to stick long-term in the Show, but too good for the minors. Jaffray fits this description as well, and the two were the main threats at EV and with an extra man. The two each scored a goal on the PP, and Lundmark tied the game with Keetley pulled, using a change-up shot Greg Maddux would have been proud to call his own. Or he whiffed on it and hit the underside of the bar and in, take your pick ;-) Colin Stuart scored the other goal on a nice PP tip of a Riley Armstrong shot.

The young guys up front were a bit mixed. Mikael Backlund skated with Grantham and Cunning to start, worked with Stuart and Sutter during the second, and then proceeded to watch the last 6 minutes of that period from the center of the bench. He didn't play much in the third either, until it was 4-1 Moose, when he likely played half of the last 9 minutes with Jaffray and Lundmark as the Heat were chasing the game. He certainly doesn't look like the best player on the team, and I noticed Playfair putting him out on O-zone draws when he could. You can see the skill and imagination, but he wasn't quite able to finish plays, and I think strength on the puck is something he'll continue to need to work on. Armstrong and Sutter were pretty nondescript, frankly. Sutter did have a good chance gifted to him when Cory Schneider left a puck beind the net, but he was unable to convert the wrap-around.

As I noted up top, strange game. Manitoba was pretty clearly better until they went down two men late in the third, then gave up two goals in short order to get the Heat right back in it. The OT was all Heat, with Garth Murray having a breakaway chance to finish things, stymied only by a good glove save from Schneider. Desbiens finished a lack-luster shoot-out with a nice deke to send most of the alleged 5,516 in attendance home in a good mood. Alleged, because if there were more than 4,000 actually in the building, I'd be shocked.

Summing up, the players that might be considered young prospects (Keetley, Pelech and the 3 rookie D, Backlund, Armstrong, Sutter) were generally kind of meh, with Pelech a step below that. In the interests of fairness, Abbotsford started the season a week later than other teams, so they still have some ground to make up.

Oh, and if anyone cares, Jimmy Canaryshirt didn't live down to the nickname, sporting a light blue-almost hinting to-mauve number last night. Inquiring minds, and all that.