I'm slowly working my way through the first 5 games. Today I'll publish my findings for the first contest against Vancouver, with a view to getting everything the first 5 contests done by the end of the week.

Scoring Chances were scored via these criteria:

- Shots from a given area on the ice in the offensive zone. Think of a wedge or pie shape, starting from the net and emanating to around the top of the face-off circles. That should exclude most shoot-ins and prayers from the boards and corners.

- Also, a shot has to be attempted in order to be counted I think. If your club gets a two-on-one and the pass is bobbled, then it doesn't count.

- Goals are also counted as scoring chances automatically, even if it was a stinker.

Without further ado, the totals for game 1. I've included the time, who was on the ice and the game state (ES or PP). 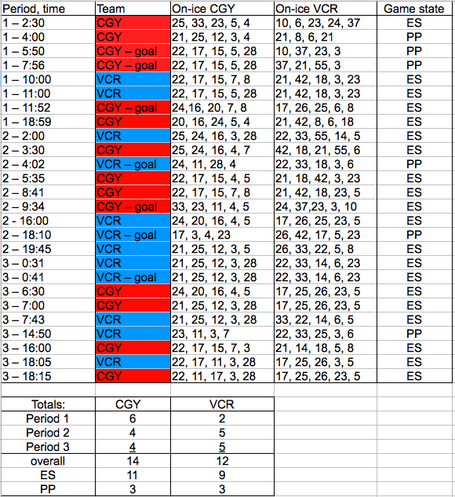 I was fairly surprised to find the Flames with the bigger score at the end of the game. You can see where the Canucks began to take over the game in the second half of period 2, but I found a lot of their shots in the 3rd were restricted to the point and periphery. The Flames, on the other hand, only saw the offensive zone a couple of times, but each foray resulted in a decent opportunity. Keep in mind, Calgary's total is also "inflated" due to the fact that Giordano and Pardy's shots found twine - otherwise, I may not have counted those as scoring chances. In addition, my definition excludes "softer" chances - say, shots that are from relatively close in, but would still make you groan if they slipped through the goalie. This includes poor angle shots from the circles for example. Vancouver likely would have led at the end of the night if those had been included.

In addition, here are individual Flames player totals (ES only): 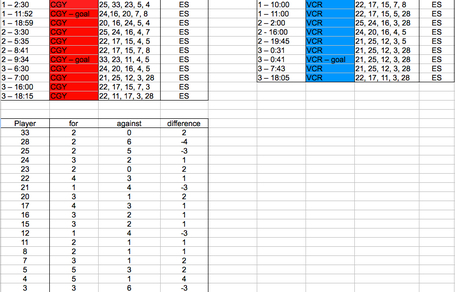 As you can see, Iginla and Jokinen created next to nothing and bled chances against. Phaneuf and Regehr mostly played behind them against the Sedin twins, so they paid the price. No surprises there. The Langkow/Bourque/Dawes unit managed the most scoring chances over the evening, while the 4th line saw the fewest chances against.

I plan to track Flames scoring chances +/- as this project moves along. I'll likely post it as a google doc once we get more established so folks can refer to current rates whenever the mood strikes them.