The always excellent Contrarian Goaltender has a recent post tackling the subject of "wins" and why goaltender performance cannot be guaged based on team success alone. I've looked at this issue myself a number of times in the past, but CG has come up with a simple but elegant formula that clarifies things substantially.

Dubbed "win threshold", the formula is (shots against - goals for)/shots against. What this gives us is...

the save percentage that would result in the team ending up with an equal number of goals for and goals against over the course of the season. If the goalie's save percentage is above that number, the team is likely to win more than the lose, while anything below the threshold means that the team should end up sub-.500 (or sub-.550 in the shootout era).

CG finds that, unsurprisingly, the Detroit Red Wings had the lowest win threshold last year, at just 0.873. The New York Islanders were at the other end of the extreme with a 0.928 WT. I went ahead and calculated the Flames win threshold from last season (2441 SA - 251 GF/2441 SA) and, as I'm sure most readers of this space would suspect, it was closer to the Red Wings end of things (0.897). Something to keep in mind when Evgeny Nabokov gets Vezina consideration again.

As per request, here's last year's WT for every team in the league, sorted from best to worst: 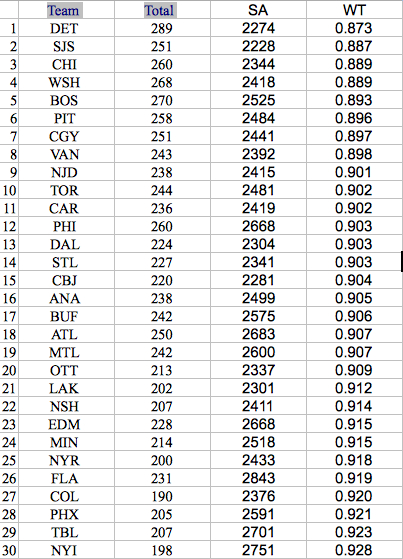